This project was developed within the scope of the competition organised by the "Fondazione RHO Luigi Vittorio", and elaborated the housing theme with great attention to the interaction between public and private spaces. Its own name - "Social" - has driven us to include some aggregation areas in the project, both external and inside the living spaces. Common areas where the inhabitants will meet, creating a sense of belonging and cooperation.

The project provided for the construction of two buildings, with asymmetrical shapes. The two buildings, facing each other, perceptually delimit the spaces of the surrounding "new park". Green is conceived as a "dynamic space" organized by large areas, allowing different types of use. The spaces can be easily recognised: more intimate those intended for the residences and more extroverted those intended for the district. Two buffer areas, with tall trees and an imposing foliage, shield the new building from the surrounding buildings; the other two sides are open towards the outside, for the free interaction with the unbuilt surrounding green areas. Moving gradually away from the buildings, the green surfaces become larger and more flexible, thus capable of meeting the needs of the surrounding. A first area, with a small cavea, was intended for the entertainment of children; an outermost area was intended for sport activities with a five-a-side soccer field and a Street basketball court.

A toilet block for the connection to the car park below is also located in this outermost area. The car park, designed to meet the usual needs, has been oversized to include an aera intended for car-sharing; a service suitable to reduce the use of cars owned by the new inhabitants of the complex, over the time. A cycle ring delimit the entire area, and a number of pedestrian paths and cycle lanes ensure a widespread use of all green areas at the service of the lot. Considering a heterogeneous and dynamic social composition of the inhabitants of the new social housing buildings, we have decided to define different typologies of "open" houses, that may change according to the housing demand over the time. The internal space of the individual units is very flexible to satisfy the ever-changing needs. These surfaces have an intrinsic ability to expand and reduce, from simplex to duplex, from one-room flat to two-roomed or three-roomed flats, with no impact on the structure or on the general envelope. 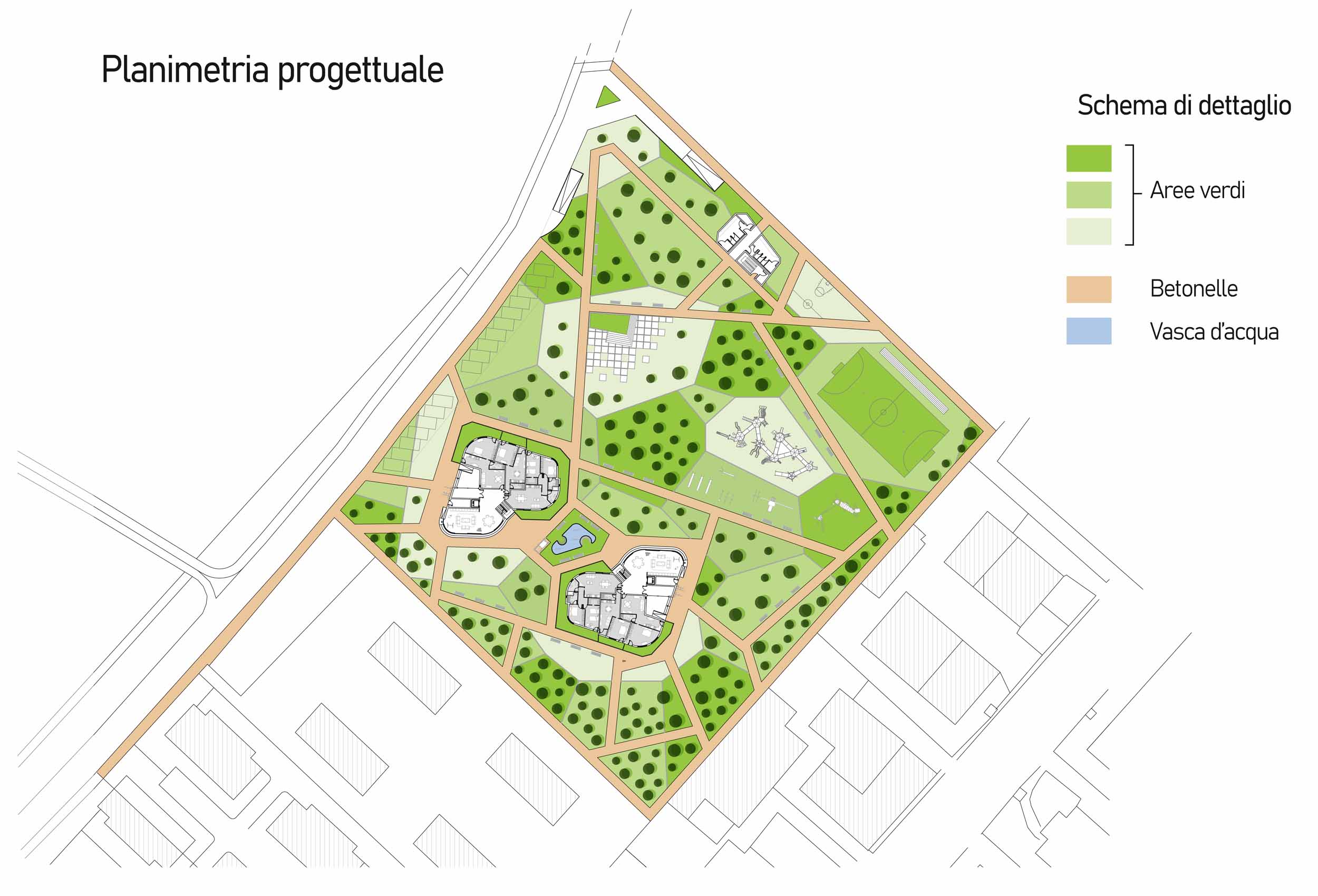 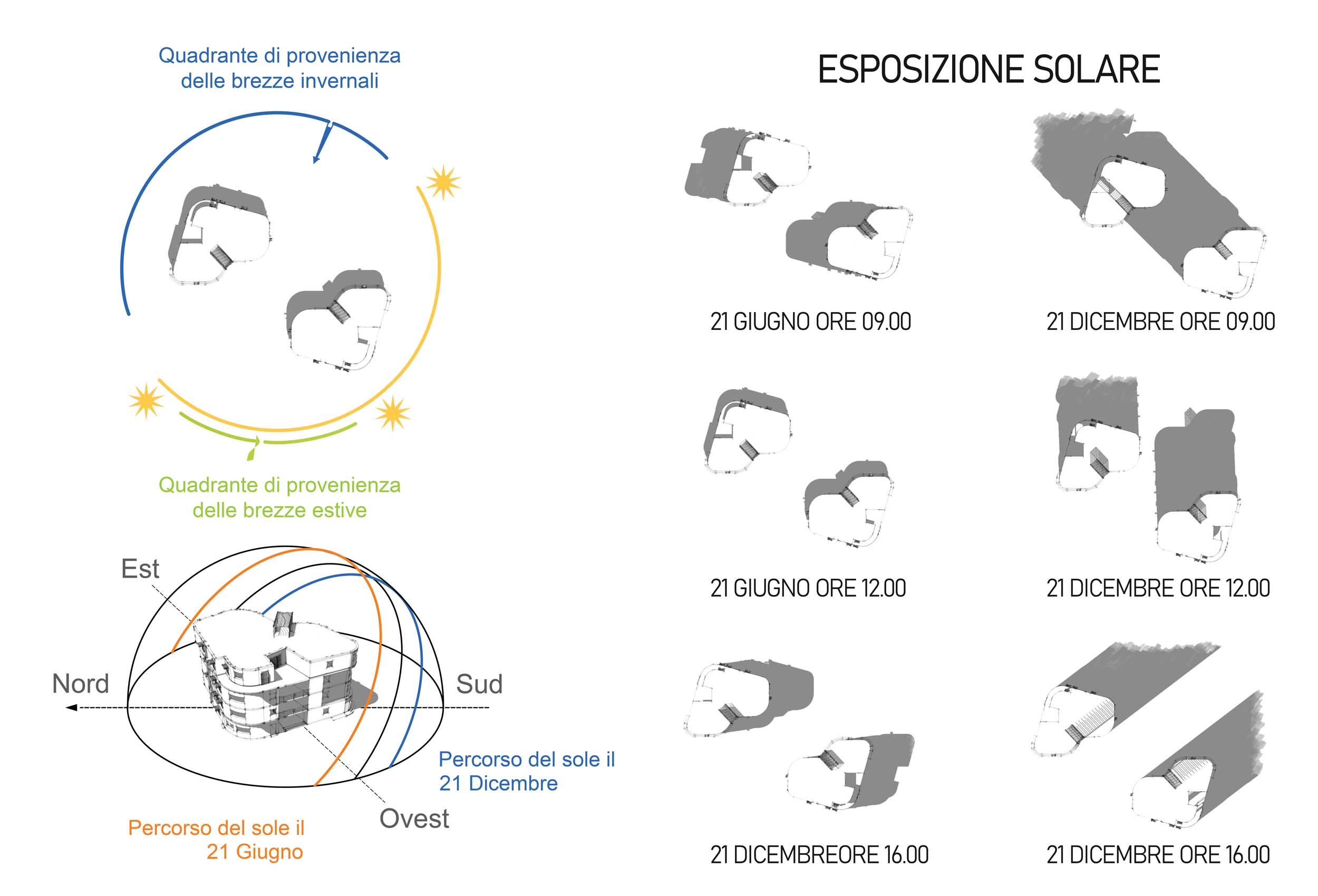 The choice of the "tower" aggregation reduces the presence of connective spaces, resulting in larger and more concentrated connection areas, almost obliging the inhabitants to a greater interaction between them. Some functions that were considered private in the past, are now moved towards common areas, thus increasing the social relationship in a sustainable environment. A common large area on the ground floor includes shared washing / drying machines, as well as meeting and waiting areas in a single open space, to speed up and encourage the interactions, and assert the sense of belonging. So that the young couple can help the elderly, while the latter entertains the family child. Given to their sizes, the landings are like "free" room, that may act as sitting room, games room, dining room or TV area. We have considered the inhabitant in its complexity, the end user and its different needs related to age, physical conditions and lifestyles. Another fundamental factor in the design of social housing is the relationship towards the environmental sustainability and energy efficiency, not only in the design phase but - above all - in the daily operation by the users and in the production phase of the materials necessary for the construction.

Therefore, the use of renewable sources, the impact of materials and their life cycle, energy costs and the configuration of the external envelope were planned accordingly. Factors such as the external envelope and the passive systems have defined the design guidelines, actualized in a functioning and active form and organism. For the energy efficiency, the project was focused on the high insulation of the building envelope. The shape and orientation have been designed to avoid the shading between the two buildings and make the most of natural summer and winter currents. The glass surfaces, of different dimensions, are sized according to the orientation, to favour the passive solar benefit. Rainwater from the roof is collected in tanks placed on the external sides of each block, to be reused for irrigation and bathroom drains. With regard to the plants, some measures have been adopted to reduce the energy consumption, such as district heating, geothermal heat pumps, radiant panel heating and cooling and controlled ventilation system with heat recovery.