The city of Matera is very well known for its houses built in stones. Its urban fabric has historically allowed the relationships between its inhabitants, thanks to the presence of small shared terraces, the proximity between balconies and views, and the sharing of passage areas for common use. Hence the desire of the city to request a design competition to elaborate the Social Housing theme, reinterpreting the relationship between public and private spaces in today's city.

This project was developed within the scope of the competition organised by Nemesis Group and elaborated the housing theme with great attention to the interaction between public and private spaces. Two asymmetric shapes face each other, delimiting a small private courtyard and a new private "park" area for public use. Green is conceived as a "dynamic space" organized by areas: more intimate spaces for the residences and more extroverted spaces for the district. The presence of water is the fundamental and generating element of this project. In addition to their aesthetic characteristics, the water pools also improve the microclimate of the courtyard and of the "park" in the hottest periods of the year, diluting the air.

The green for public use receives and absorbs the needs of the greenery-free surroundings. An area intended for the whole district, but mainly designed for the children and the elderly.
In this area there is also a block suitable for the connection of the car park below, and a "green" wall that hides the ramp and delimits the public garden, shielding it from the passage of cars. The car park, designed to meet the usual needs, has been oversized to include an aera intended for car-sharing; a service suitable to reduce the use of cars owned by the new inhabitants of the complex, over the time. A covered area, with a strong plastic impact and recognisable on the façade in Via Galileo Galilei, has been reserved to the shelter of EPACs (Electric Pedal Assisted Cycle), both to cope with the complex orographic features of Matera and to encourage their use. 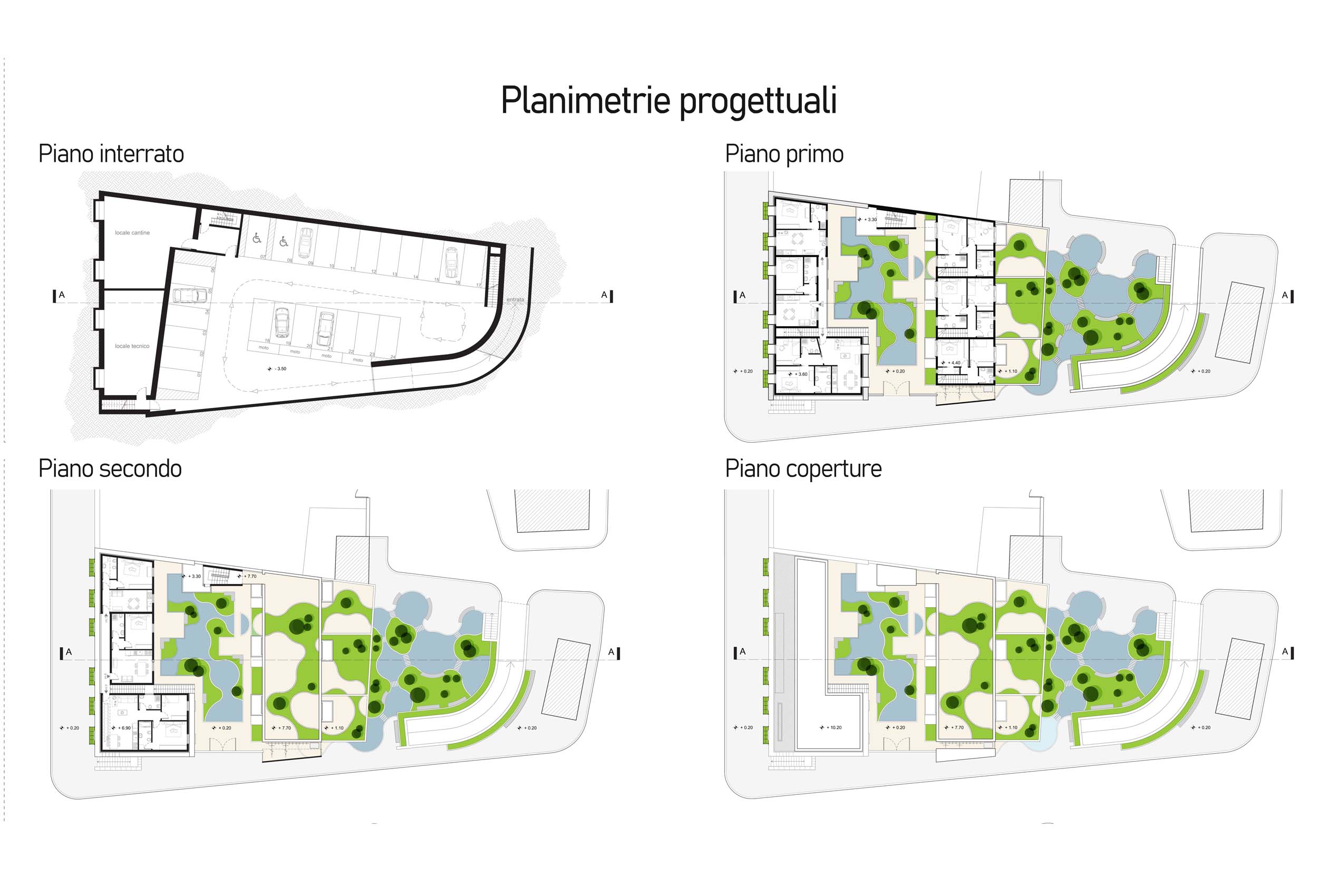 The choice to keep the original envelope of the block overlooking Via Nazionale has been important. Such choice has two distinct but synergistically connected origins: a performance scope, that exploits the thermal mass and a spaces recognisability scope. The choice to maintain the existing wall has influenced the technological choice of construction, preferring an innovative steel and precast concrete structure to the classic cast-in-place reinforced concrete. Prefabricated houses and their relating market have clearly evolved in recent years, so much as to represent a new horizon for the building industry. Before, they conveyed the idea of dilapidated and unsafe houses; today, thanks to the technological improvements, some models are excellent. They are built with high quality materials and equipped with anti-seismic and energy-saving technologies. They also have a great aesthetic quality and design. Furthermore, the delivery times are truly short, and it is also possible to implement changes during the construction phase. Thanks to the excellent current quality of these prefabricated buildings, they can be equalized to traditional houses.
The advantages are:
- Economic savings on both the purchase and the housing costs;
- Truly short production and delivery times;
- Possibility to choose materials with low ecological impact, allowing energy savings and noise reduction.
Considering a heterogeneous and dynamic social composition of the inhabitants of the new social housing buildings, we have decided to define different "open" house systems, that may change according to the housing demand over the time. The internal space of the individual units is very flexible to satisfy the ever-changing needs. The surfaces in the block overlooking Via Nazionale have an intrinsic ability to expand and reduce, from simplex to duplex, from one-room flat to two-roomed or three-roomed flats, with no impact on the general envelope. The single connecting staircase reduces the presence of connective spaces, resulting in larger and more concentrated connection areas, almost obliging the inhabitants to a greater interaction between them. Some functions that were considered private in the past, are now moved towards the common areas, thus increasing the social relationship in a sustainable environment. A large common area in the basement includes shared washing / drying machines, as well as meeting and waiting areas in a single open space, to speed up and encourage interactions, and assert the sense of belonging. 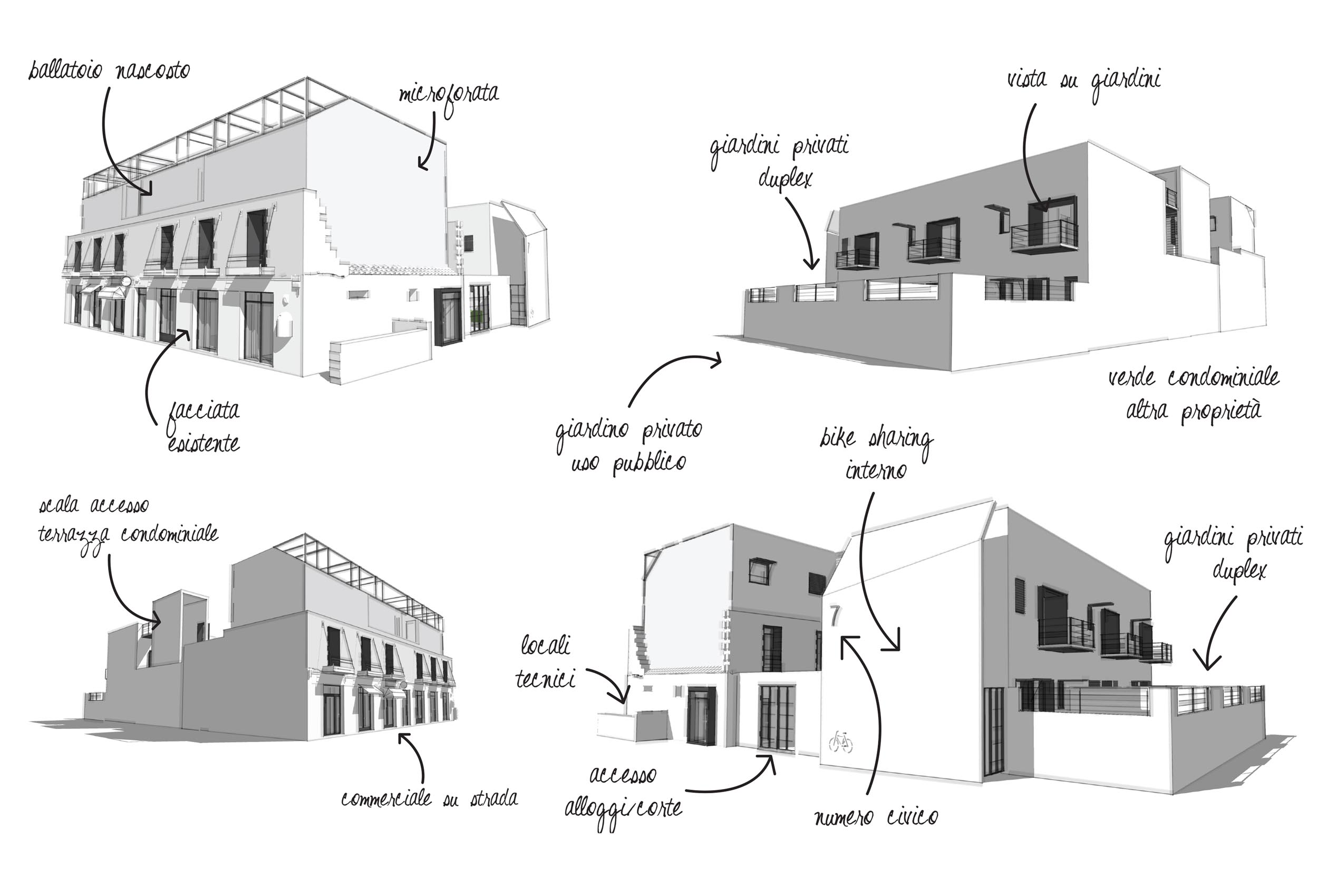 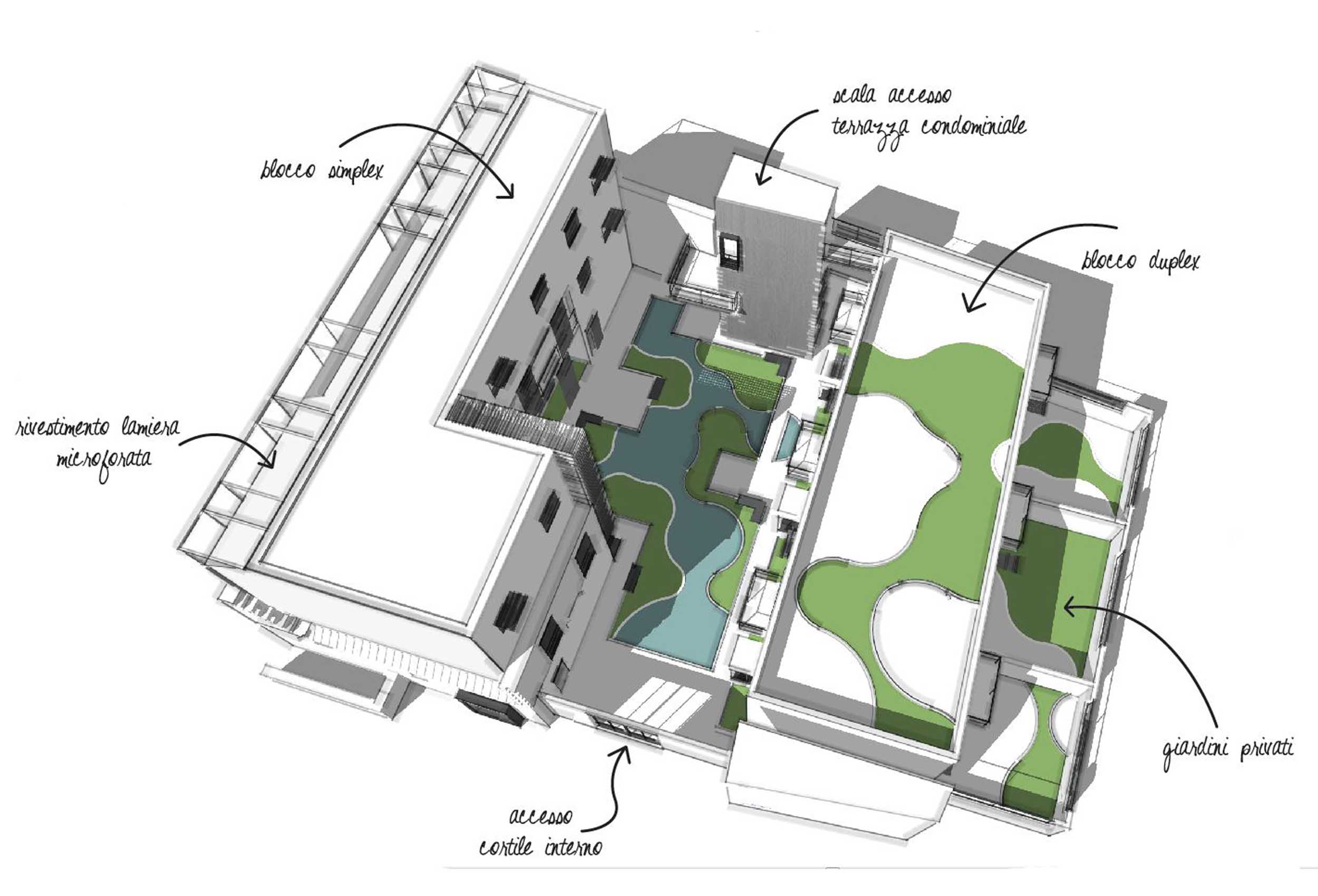 Another fundamental factor in the design of social housing is the relation towards the environmental sustainability and energy efficiency, not only in the design phase but - above all - in the research of construction materials. The shape and orientation of the two buildings have been designed to avoid the shading between them and make the most of the natural summer and winter currents. The windows of different sizes, differ according to their orientation, favouring the passive solar benefit. Rainwater from the roof is collected in tanks placed on the external sides of each block, to be reused for irrigation and bathroom drains. With regard to the plants, some measures have been adopted to reduce the energy consumption, such as district heating, geothermal heat pumps, radiant panel heating and cooling and controlled ventilation system with heat recovery.
OPEN AIR WATER TANK
An external "open-air swimming pool" in the courtyard is used as thermal adjuster, that is the thermal inertia of the water is used to stabilise the air temperatures. The aim is to influence the formation of breezes linked to the temperature variations occurring in the daily cycle (day and night). The potential of this technology will allow a greater passive cooling during the hot season.
A GREEN ROOF
The choice to use a green roof is the result of different needs and design objectives: the operation of the air conditioning systems is significantly reduced in summer and an adequate insulation is provided in winter and summer. These two aspects allow a reduction in the use of air conditioning systems in summer and the reduction of heating costs in winter. Therefore, a significant energy savings is achieved.