Office buildings are generally characterised by sobriety and anonymity because they house many different realities, while our aim for the project of this building was precisely to dismantle this idea.

Office buildings are generally characterised by sobriety and anonymity because they house many different realities, while our aim for the project of this building was precisely to dismantle this idea. From the beginning the goal had been to create a building with its own identity, characterised by a visual connection with the surrounding buildingsof the Complex as well as creating a visual connection among the floors of the same building. We have used just one material to achieve our objective, which is a red perforated sheet distributed along the facades, emergency stairs and other architectural elements. This fil rouge on the entire building enclosure has made it possible to create a compact and evocative visual architectural design and identity. 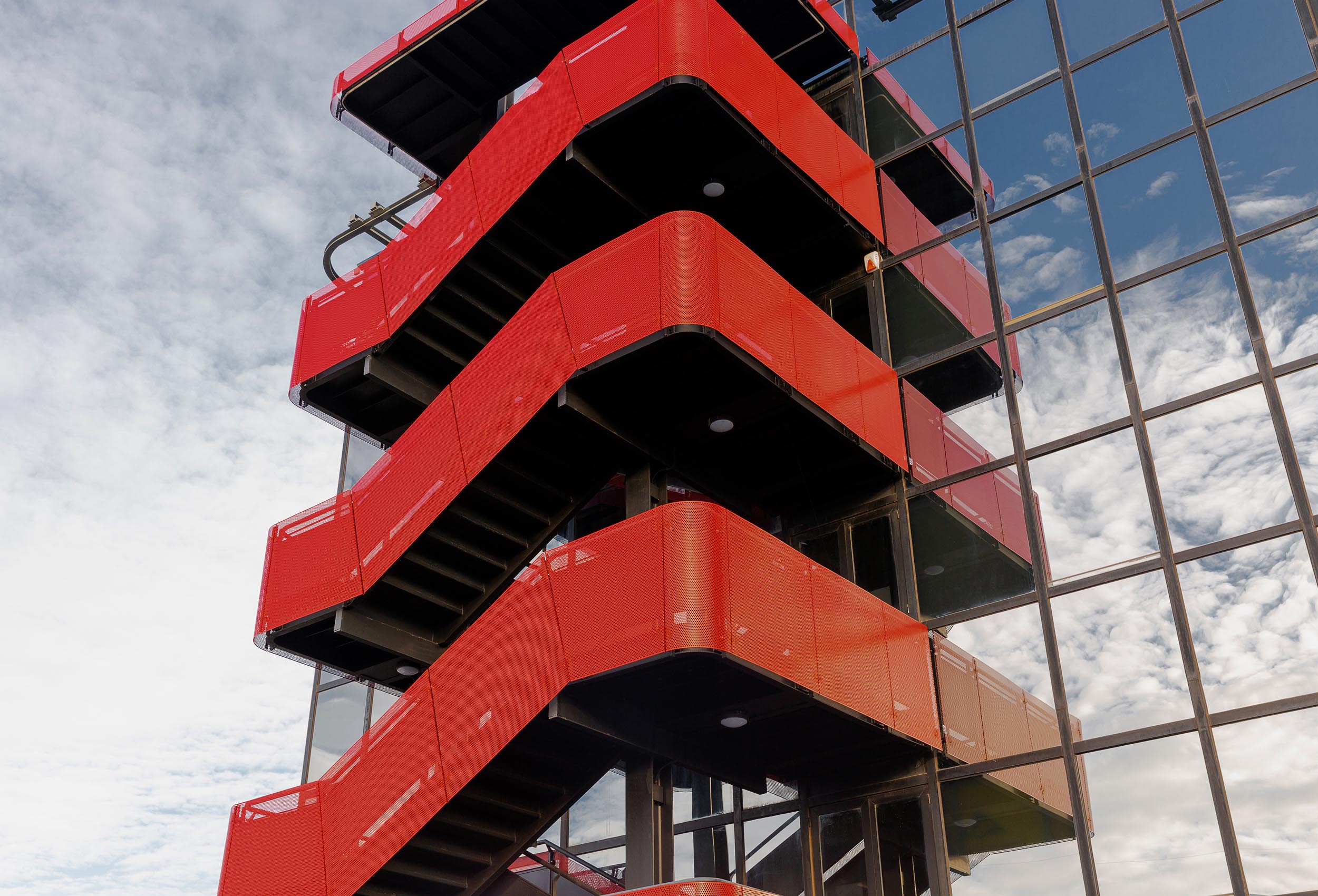 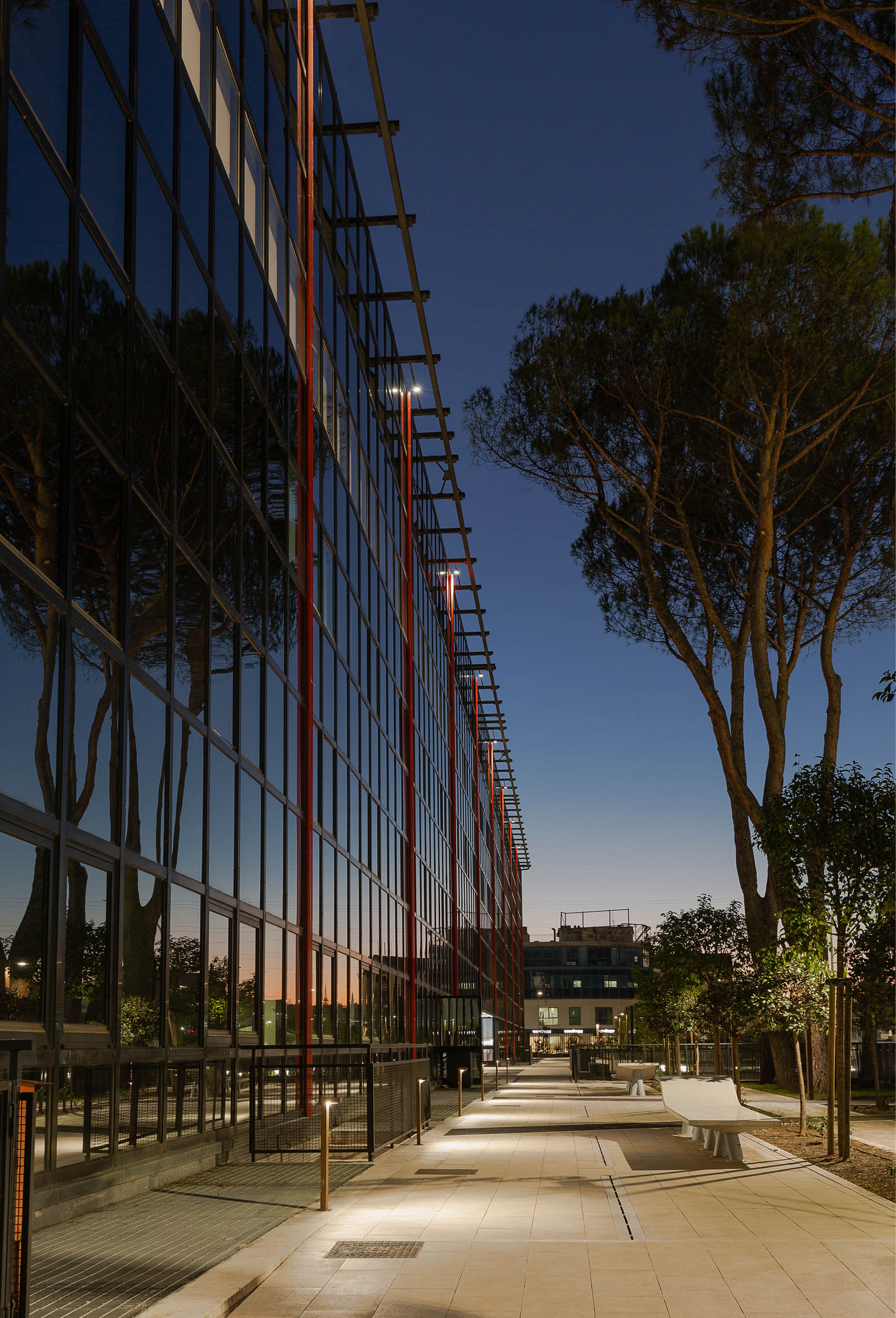 The choice of the red colour is no coincidence; it reflects both the visual image of the Company owning the building and gives it a strong and institutional character, intrinsic to the colour itself. The facades are characterized by modular windows, spaced out by red perforated sheet metal strips every four modules. The red strips emphasize the architectural structure of the building, embellish it, and convey a slight perceptual movement. The emergency stairs, whose perimeter is completely covered by this red perforated sheet, contribute to the unitary visual perception of the project of this building. The interventions carried out resulted in a great visibility of the building even at far distances and strengthened its identity and uniqueness. Day and night are exactly the same as the image conveyed by this project is undoubtedly recognizable also at night thanks to the specially-made lighting fixtures that underline the fil rouge. A LED is placed at the top of the red strips of the facade, and its light softens downwards thus underlining the intervention even more; the same was designed and implemented on the emergency stairs that transform themselves in lighting elements at night, almost like lanterns. The two main entrances to the various buildings have also been redesigned. For the first one, we had realised a set back of the facade through a geometric and flared cut whose objective was to further put into close communication the external part with the internal one and increase the identifiability of the entrance for the users. At night, the setback of the facade is underlined through a simple and elegant led strip that highlights shapes, functions, and the threshold between "in and out".

We decided to design the second entrance as a negative of the first one; so, we have realised an overhang in place of a setback. It consists of a shelter with strong geometric shapes which allows an easy identification of the entrance that is placed in the inner side of the Complex. It also offers a shelter to the users in any seasons, protecting them from the Autumn rains or from hot Summer days. The design of these interventions was meticulous and stimulating; the challenge was to combine the spatial modelling with a clear and recognizable visual image that the Complex required. 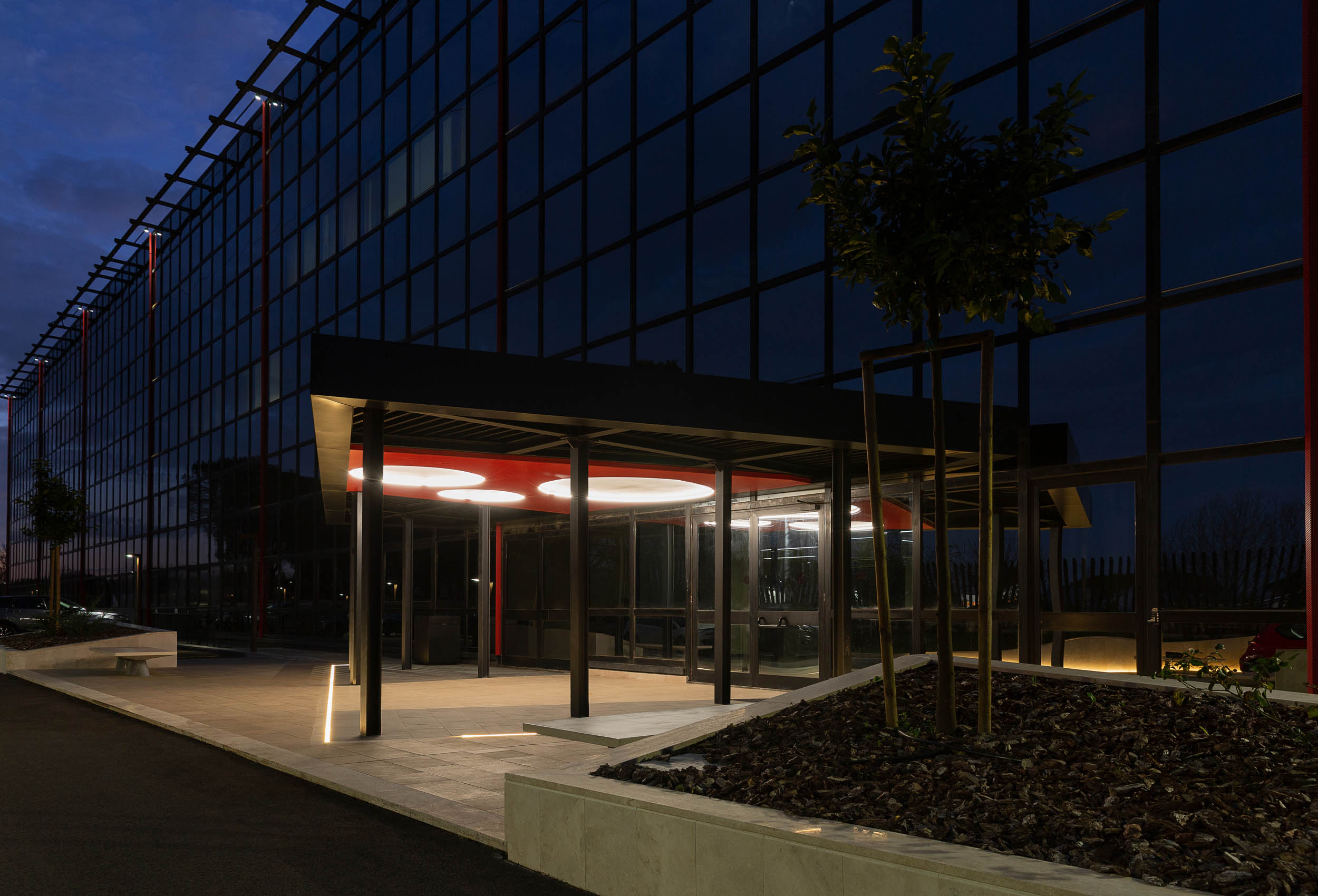