In one of the most iconic districts of Rome, we designed and took care of the realisation of the outdoor lighting of a building with a great architectural value. The aims was to enhance its value even in the evenings through the illumination of the facades and the central courtyard.

In one of the most iconic districts of Rome, we designed and took care of the realisation of the outdoor lighting of a building with a great architectural value. The aims was to enhance its value even in the evenings through the illumination of the facades and the central courtyard.
In addition to the lighting design, we also took care of the adaptation of the railing of the internal staircase, the new internal signage, and the maintenance of external areas. We are talking about the magnificent Palazzo Luigi Sturzo.
We have carefully studied the history of its conception and architectural composition to intervene on its architecture with the upmost meticulousness. In the mid-1950s a competition was announced for the realisation of the project of the new headquarters of Democrazia Cristiana. The winner was Saverio Muratori whose aim was to re-interpret the theme of the "Public Palace" through a closed plan with a central courtyard surrounded by floors and arranged according to a functional hierarchy (portico, main floor, mezzanines, and loggia), enriched by architectural and linguistic elements that reinterpret the Renaissance scheme. The building is made up of a concrete structure with mixed floors; the closing walls of the upper floors are made up of bricks and concrete slabs. The wall continuity is achieved thanks to the repetition of materials and the articulation of the facade through stringcourses and ribbon windows. At first glance, the poor enhancement of the facades of the Palace was more than evident; it was illuminated only by the streetlights of the public car park in front of the square. 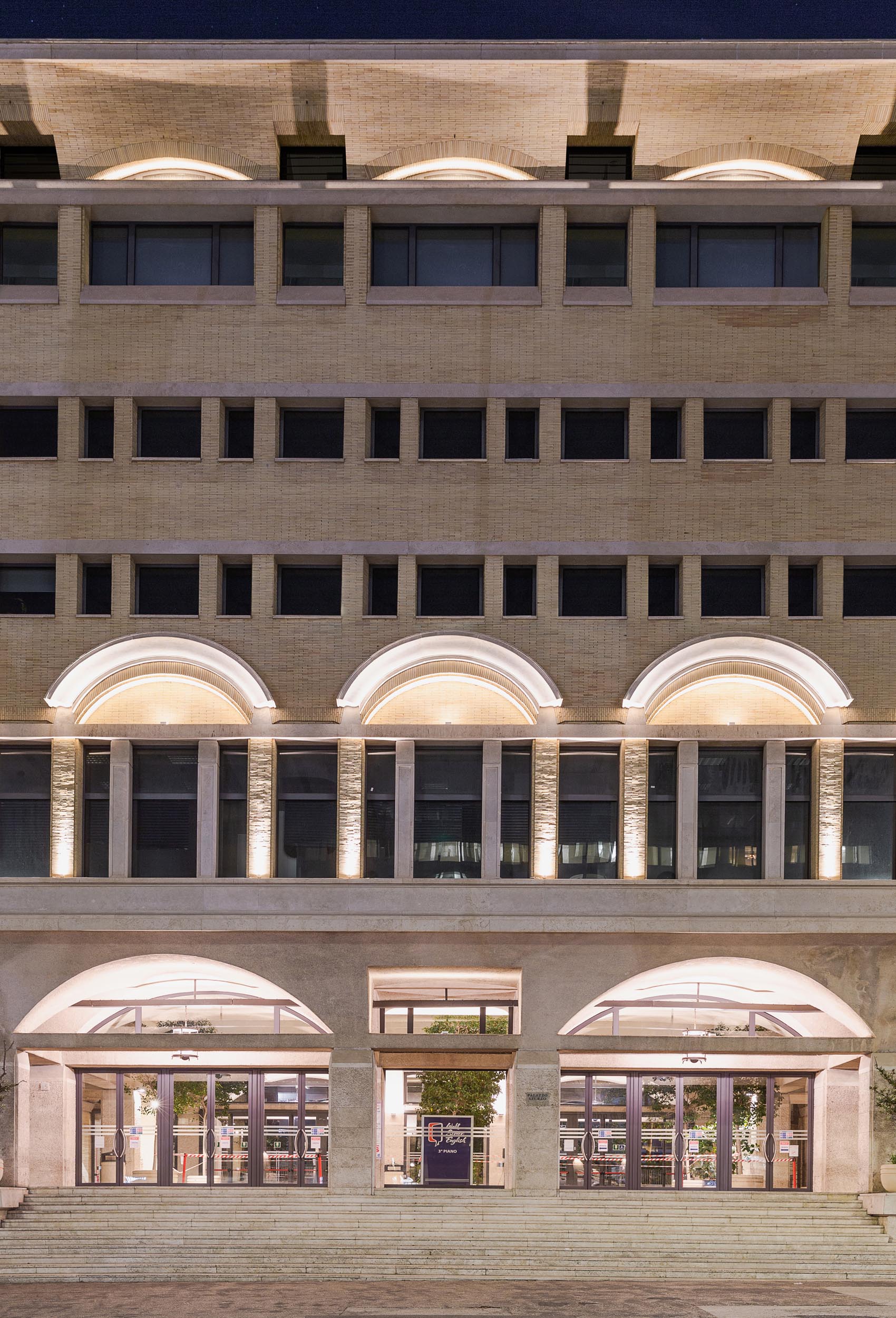 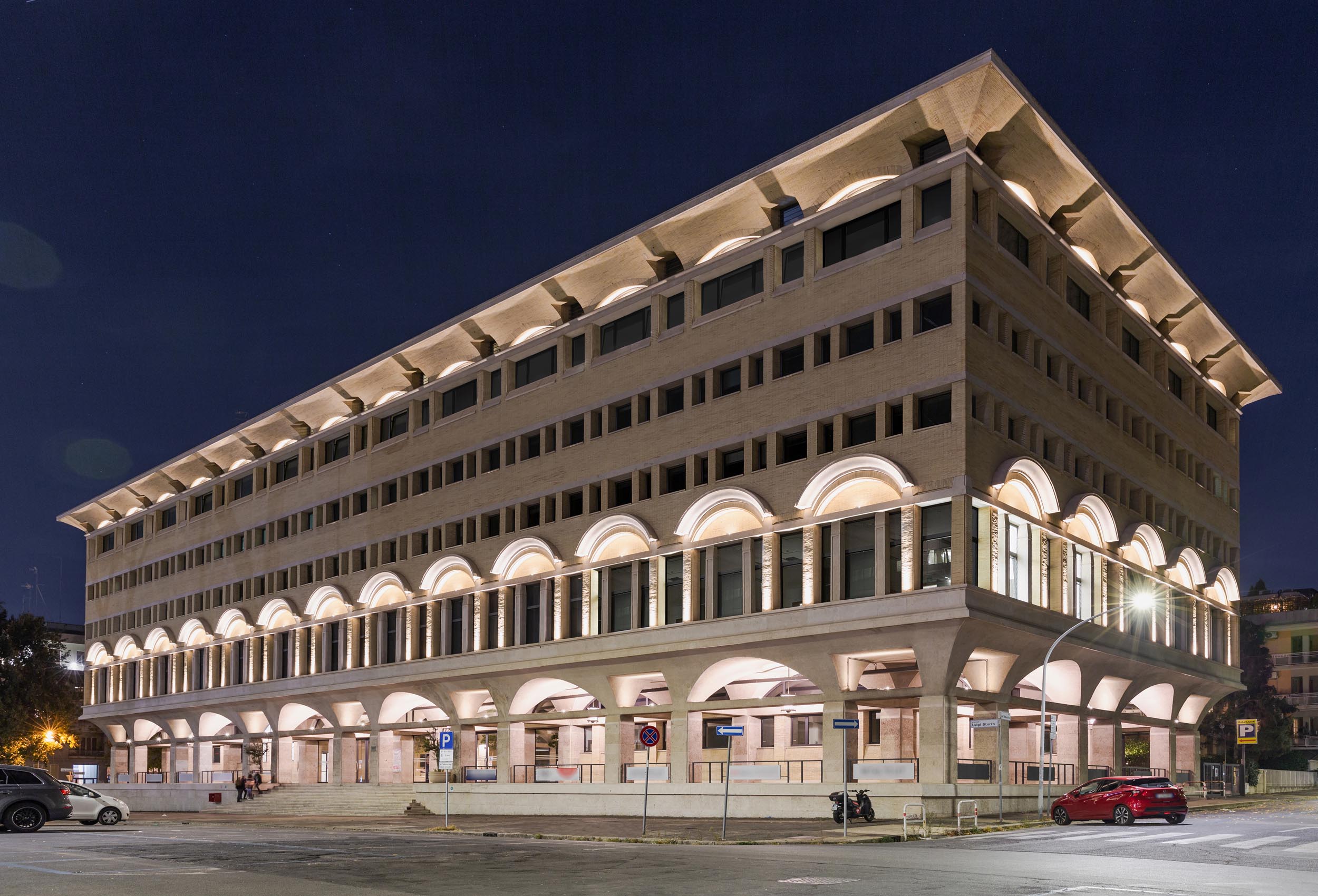 This is why lighting has been the driving force of the whole project. The beauty of Palazzo Sturzo can be admired from two different spots, namely from the outside in its urban context and from the inner courtyard; therefore, our intervention aimed at the enhancement from all points of view, both internal and external.
The enhancement of the building with artificial light allowed to meet the requirements of two distinct functions, which is the minimum safety lighting and the optimal visual usability of the artefact. The objective of the project was to highlight the architectural typological elements by using accent lights, whose solutions were adapted to each single specificity of the elements.

The shadows became an enriching element of the whole, whetting the visitor's curiosity and without creating a misrepresented or distorted perception of the space. Although this facade with its architectural value will never appear "flat" (even with a front illumination), we have provided a system capable of ensuring a soft uniform lighting, shaded where necessary. So, our design was precisely based on the architectural hierarchies of the facade. The new lighting frames only the connecting strip of the building to the ground and to the sky, using a direct lighting generated by small projectors. The projectors are positioned along the stringcourses and their light is oblique to the pillars of the main floor. The same criterion has also been applied to the inner courtyard. Particular attention has been paid to the enhancement of the sculpture dedicated to Alcide De Gasperi through an illumination that increases its perceptual depth, created by means of a soft oblique light of a small spotlight placed in a corner and a linear light, hidden behind the sculpture. To respect the pre-existence, all lighting fixtures were chosen according to the same finish colour of the travertine and their dimensions do not disfigure or affect the image of the building. We used various lighting fixtures made by Flos: the Pi 50 Spotlight to illuminate the pillars and the sculpture, the Flos Fenestra to illuminate arches and cornices and the Flos Perseo to illuminate the lunettes inside the courtyard. The whole intervention has obviously also considered the sustainability and the energy efficiency by replacing the old fluorescent and halogen bulbs inside the common spaces with LED lighting fixtures. 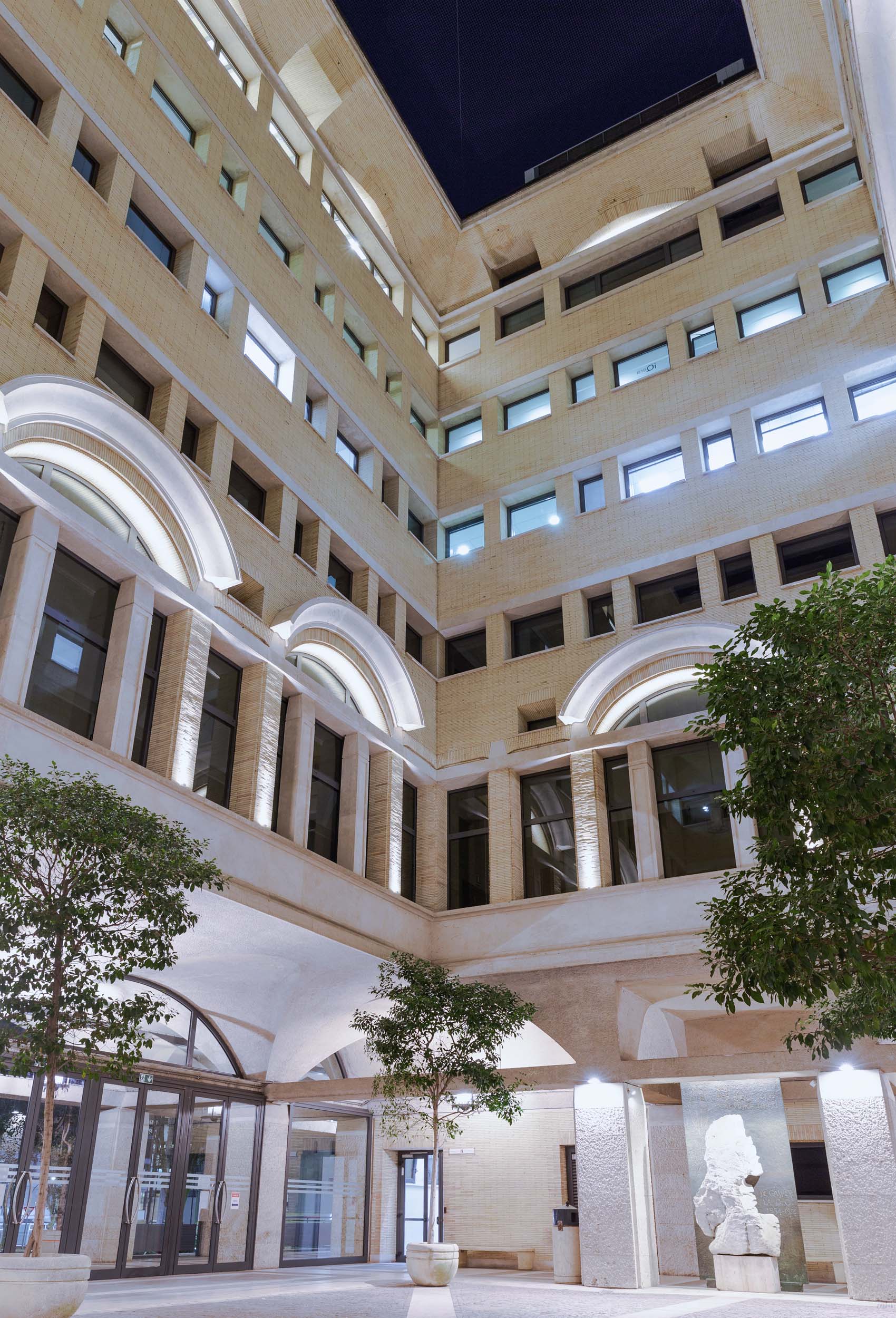 In addition to the lighting, our project involved another meticulous intervention, which is the adaptation of the handrail of the internal staircase to the safety standards. We intervened on the pre-existence without affecting the aesthetic value of the historical architectural artefact; a new element composed by a metal box profile was joined to the existing handrail. This new element is raised compared to the existing one and is held up by means of light supports, fixed to the pre-existing elements by hot welding, to create a reversible intervention. The sharp-cornered lines of the handrail, where it bends towards the ground, are softened by a shaped metal sheet, customized according to the existing handrail.

A further intervention included in this project was the redesign of the entire internal signage of the building. We conceived it by using plexiglass panels on which some invariable information may be screen printed and on which removable films can be applied to house the information that may vary over time (e.g.: change of Company logos). To complete this restyling, we deemed necessary to intervene on the external vegetation in the back that was in an extremely poor state of degradation and abandonment. So, we provided for the removal of old dried and diseased trees and replaced them with new hedges, easier to handle and more suitable for the space available. It is therefore evident that the entire intervention aims to highlight the great value of this property by giving back a surprising architecture to the City that has remained hidden in the shadow for too long. 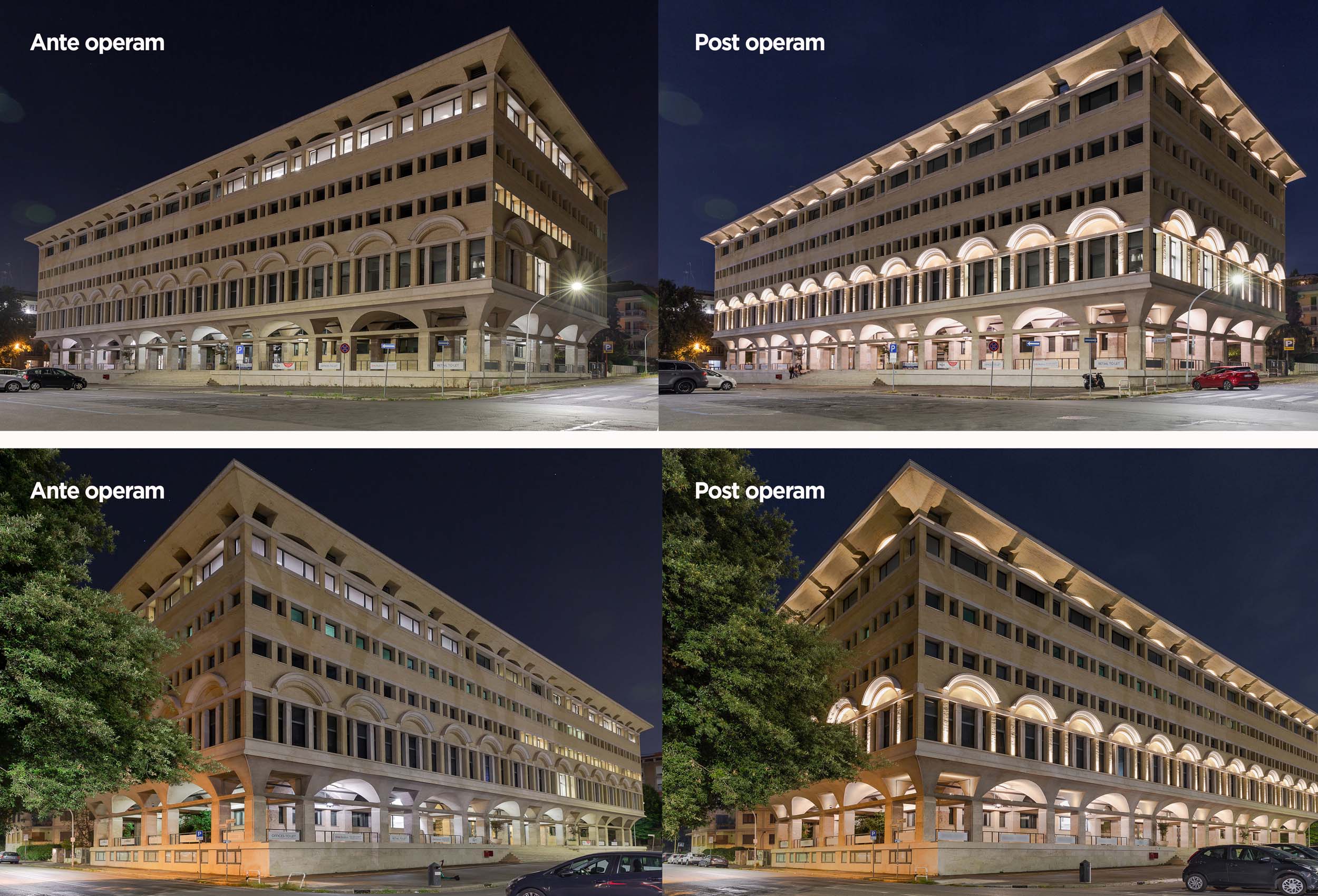