The icons of Design have no time

They enter our homes, our offices and all human spaces leaving a sign in the life’s history of each person. Elegance, simplicity, irreverence, colour, minimal ... everything participates in the creation of an object that travels in memory.

Do you think that the polyurethane foam is unsuitable for creating an object with a high aesthetic value? Absolutely not! The designer Michel Ducaroy realised a unique and non-conformist design icon with this material: the Togo sofa.

A sofa without armrests which, thanks to the 5-density polyurethane material, acquires – in its complexity - a strong flexibility and an inimitable comfort. The fabric or leather cover of the seat is completely removable and characterised by a pleating process which, thanks to the polyester padding content, gives a pleasant and embracing softness.

This sensation is amplified by the shapes that can be given to the sofa; for this reason, it is often playfully associated to caterpillars or toothpaste tubes. The mix of materials and folds create an embracing and compact mass that is light, despite its size.

The Togo sofa was presented for the first time at the Salon des Arts ménagers at the Palais de la Défense in Paris, in 1973; it became so popular that Ducaroy and Ligne Roset had to immediately produce further additional pieces, including casual armchairs or the famous corner element, suitable to create sofas with extravagant dimensions and shapes.

Ducaroy also developed other ideas, including a sofa bed with a flexible mattress structure which, despite its particularity, had not the same success as the original.

The Togo Sofa is still a contemporaneity emblem; a timeless icon dreamt up to spend lazy moments in the greatest comfort, embraced by the softness. 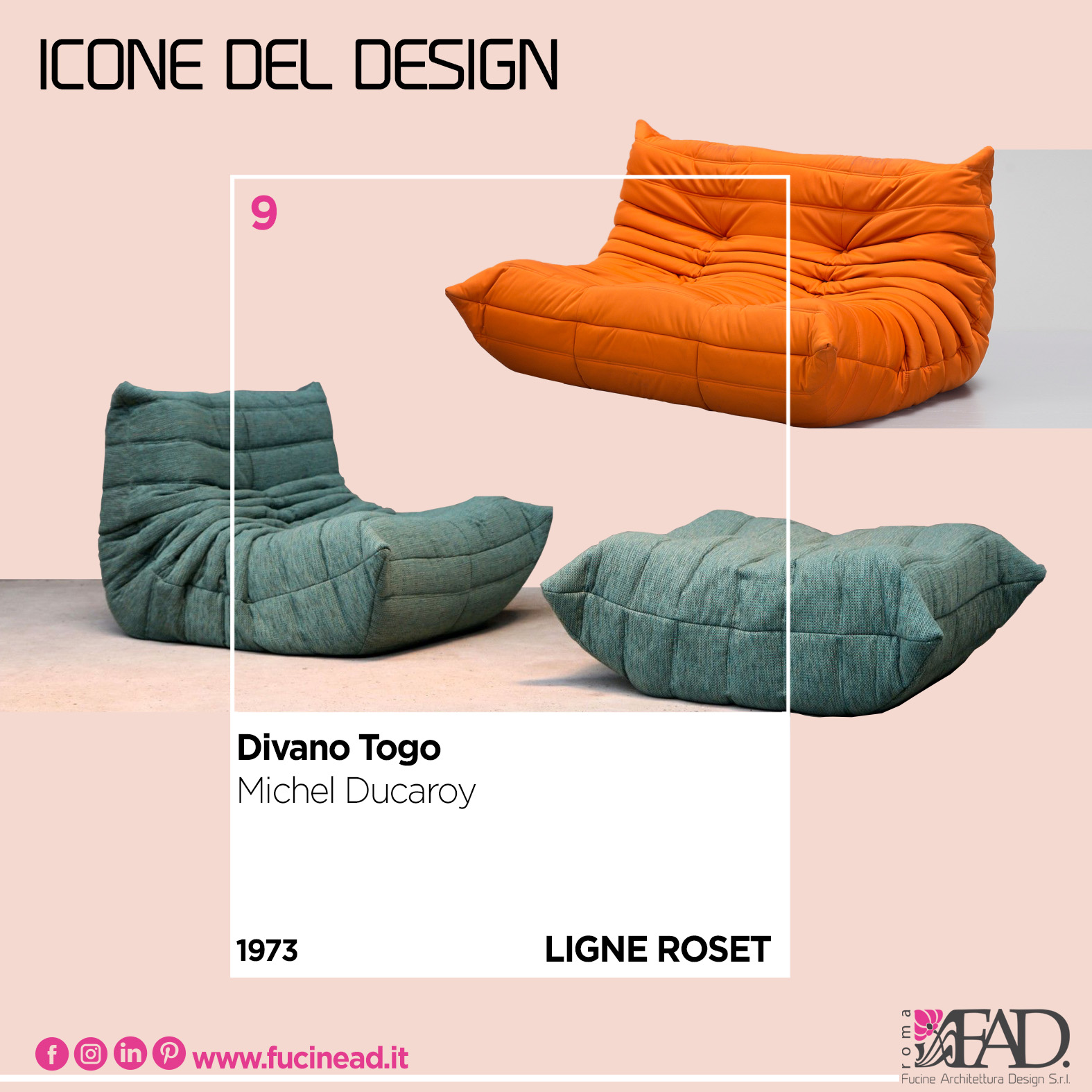 If we think of Ludwig Mies van der Rohe, we immediately think of “Casa Farnsworth”, of the Neue Nationalgalerie in Berlin and - certainly - of the pavilion, realised for the Universal Exposition of Barcelona in 1929. On that occasion, one of the worldwide design icons was born: the Barcelona Chair.

Mies' idea sprang up from the wish to revisit in an industrial key the “sella curulis”, the Etruscan upholstered chair used in ancient Rome, reserved to magistrates and Roman aristocracy. His idea was to accommodate the Royalty of Spain to the best, during the Exposition. Mies said that he conceived this chair "for the rest of the King".

The Barcelona Chair was initially designed according to the technologies of the time, using therefore a metal part made of bolted pieces with elegant and delicate curved feet; the frame was then replaced by stainless steel in 1950. To recall the ancient Rome, he initially thought to use wild boar skin for the upholstery, then replaced by bovine leather divided into 40 hand-sewn squares, whose corners are quilted with buttons.

The smoothness and slenderness of the structure, together with the hefty handcrafted upholstery give an elegant, important, and impressive effect to the Barcelona Chair.

The production of the Barcelona Chair has never been interrupted, even during the Second World War. Mies sold the marketing and production rights to his friend Florence Knoll (Knoll brand) in 1953, during his period at the Illinois Institute of Technology (always designed by Mies). 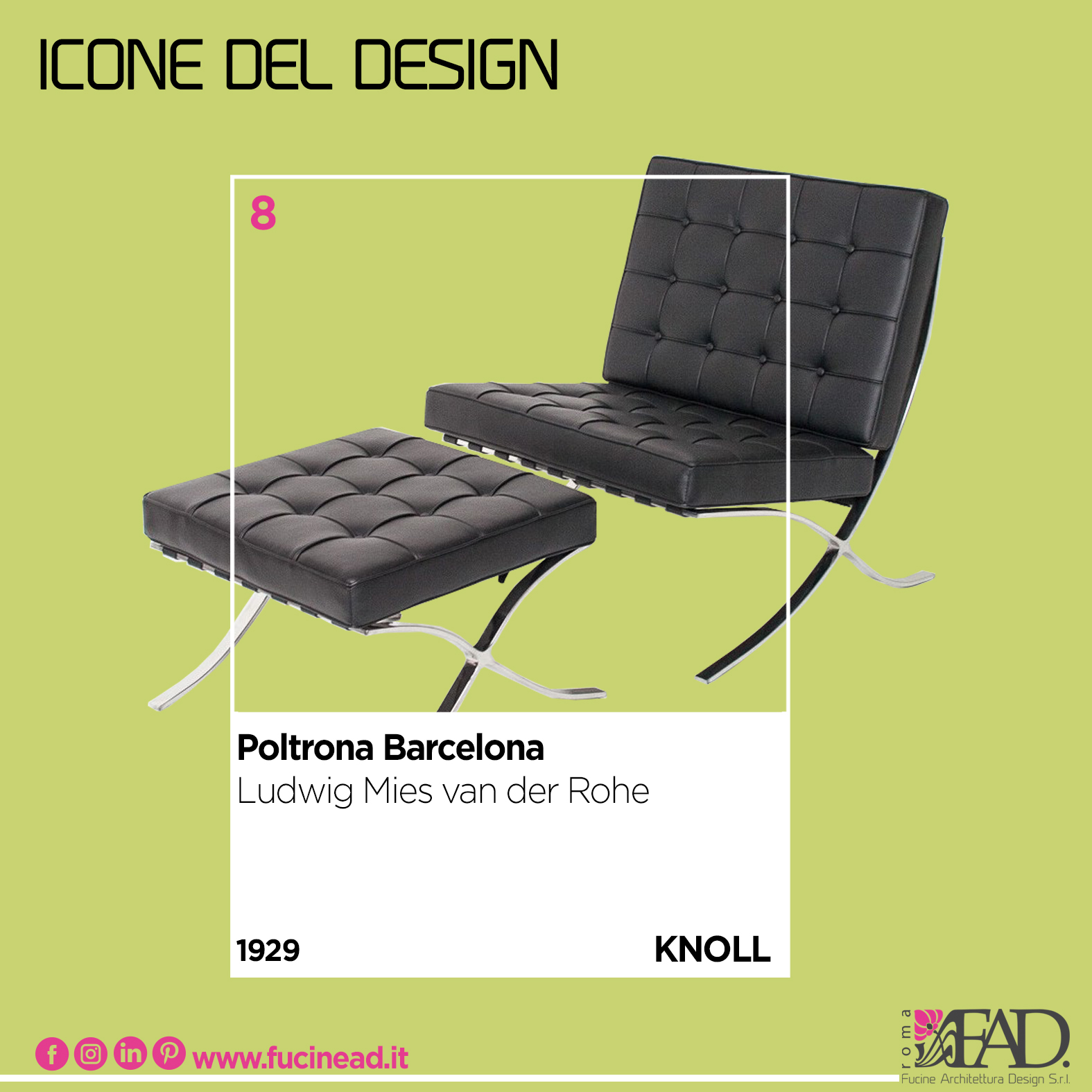 Winner of the Compasso d'Oro two years only after its conception, "Atollo" is one of the most iconic lamps of the world scene, characterised by a timeless design.

Designed by the architect, town planner and designer Vico Magistretti, this lamp has completely revolutionised the classic idea of table lamp, thanks to the use of three distinct shapes: a cylinder, a cone, and a hemisphere - three neat geometric solids.

The play on subtractions rather than on additions resulted in an essential and geometric design, whose well balanced shapes give it a unique and refined decorative style. The lamp was commissioned by the company "Oluce", and was initially designed in two material variations: one in lacquered aluminium and one in opaline glass; both suitable for a welcoming and delicate light diffusion. There are currently six lamp models: three for the metal type and as many for the glass type.

A versatile lamp, adaptable to all environments: from living rooms to bedrooms, from studios to entrances. 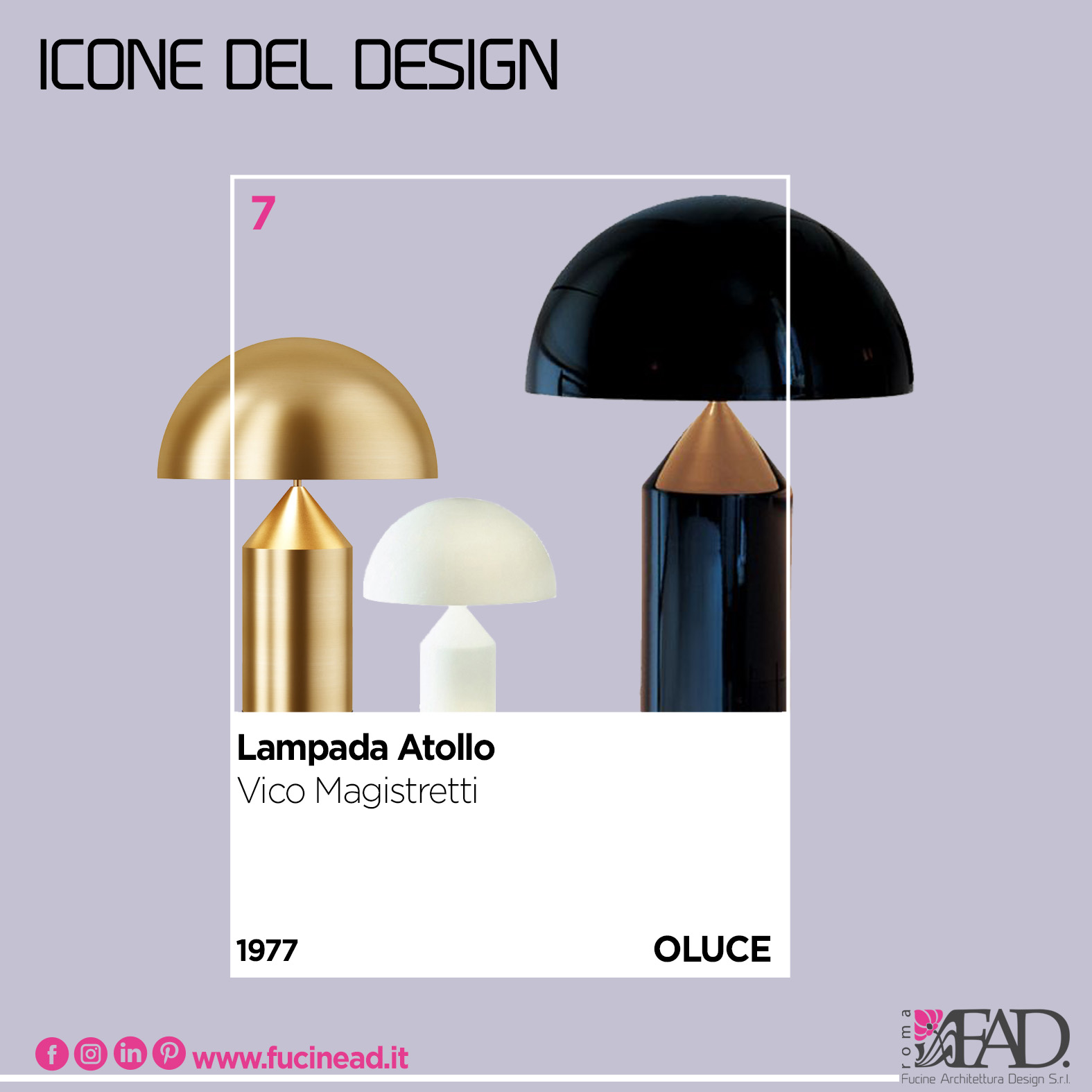 The result of this great work by Alessandro Mendini, an Italian worldwide famous architect, artist and designer, originates from a strong and incisive statement: “everything has already been invented and what remains to be done is just a reinterpretation of pre-existing objects, adding decorative or structural elements that modify the dynamics of the original."

The idea was born during a voyage in Veneto, when Mendini came across an eighteenth-century style armchair which gave him the artistic illumination, and in 1978, the first example was created.

As well as the reference to its history, the greatest feature of this armchair is the use of polychrome dots, which invade the entire armchair from the fabrics to the wooden structure, thus giving it a sensation of fluffiness. The production was limited to few pieces, all rigorously created by artisan hands and controlled by Mendini, in all their curves and shapes

Currently, Mendini's granddaughter is in charge of painting by hand the individual armchairs while "Cappellini" is in charge for large retailers production since 1993. They have produced it by implementing a change to the upholstery fabrics only without changing the wooden structure. "Magis" has instead created an outdoor version in plastic material.

Since then, the history of this armchair has been studded with so many successes that it entered in the MoMA collection. 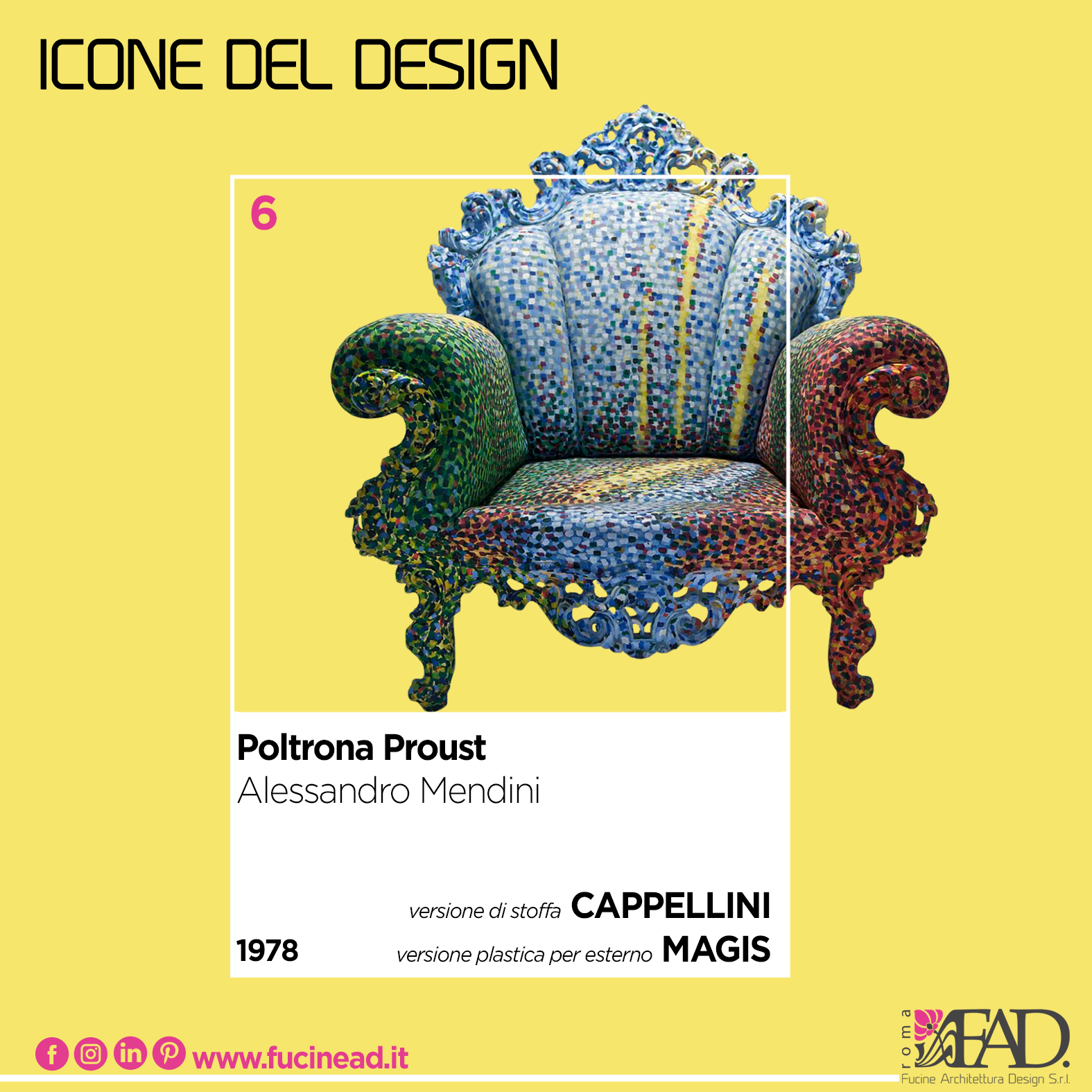 Who is Isamu Noguchi?

We must ask this question to fully understand the value of the Coffee Table. Besides being an architect and designer, Noguchi was - above all - a sculptor.

Coffee Table was born as a real sculpture in which the table, structured in rosewood and glass, uses the bio morphism to create function and art. The table was created as a "sculpture for use" and "design for production", usable both in work and residential environments.

In addition to the use of quality materials, its main feature is the structure. The solid walnut base consists of two identical inverted parts, positioned on a single rotation bar: this ensures the stability of the glass base positioned above, and gives a touch of fluidity and elegance, at the same time. 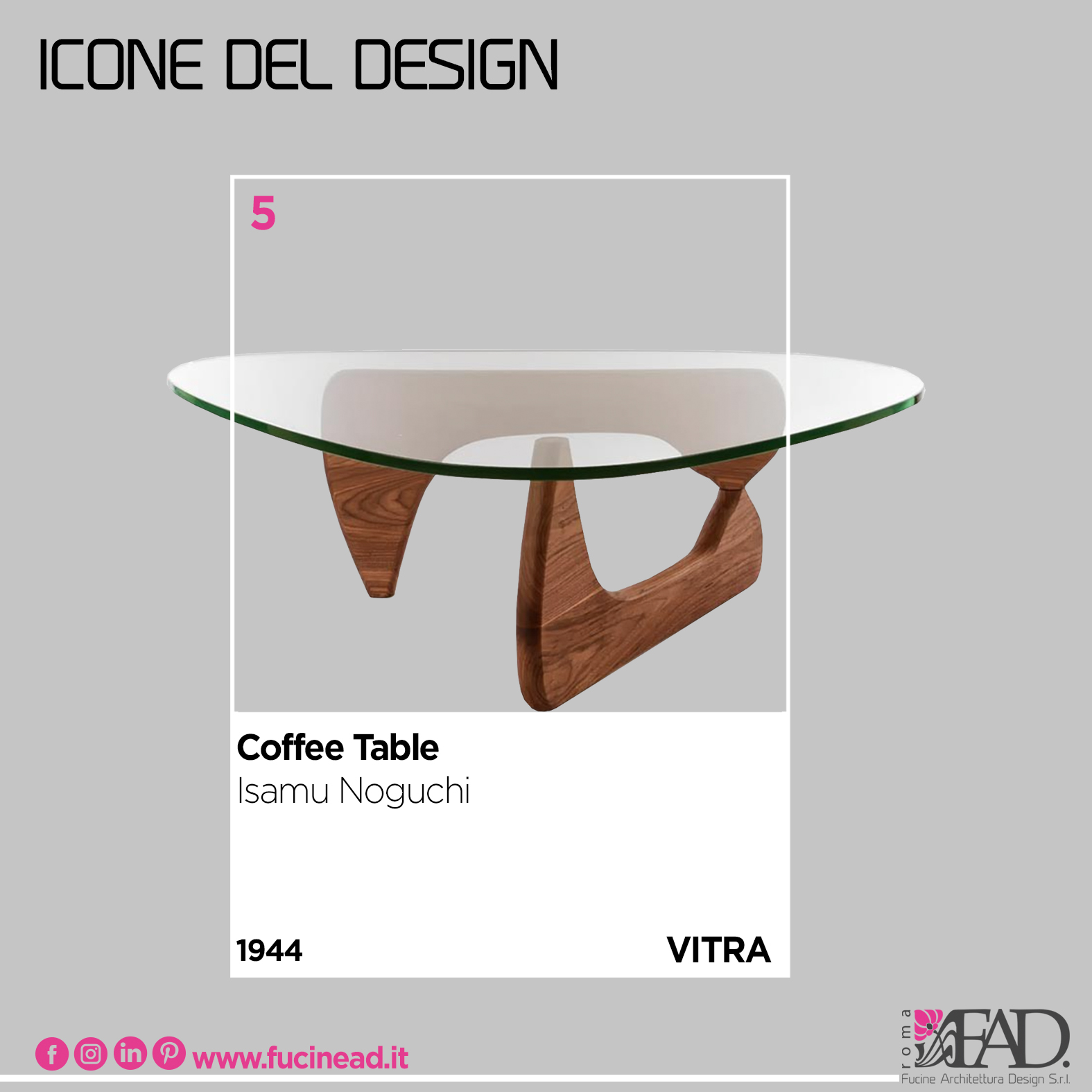 As clearly expressed by its name, this seat is inspired by the homonymous flower. It consists of a central pedestal that recalls the stem of a flower and that also constitute the backrest; a whole whose aim is the fluidity and a welcoming feeling.

It is no coincidence that Saarinen created this seat inspired by soft and delicate forms, instead of the austere and geometric German style of the time.

The seat is characterised by a removable filled cushion in various colours, with removable lining.

This chair has become one of the greatest icons of the world design, and has been awarded both by the Museum of Modern Art in New York and with the Federal Award for Industrial Design. 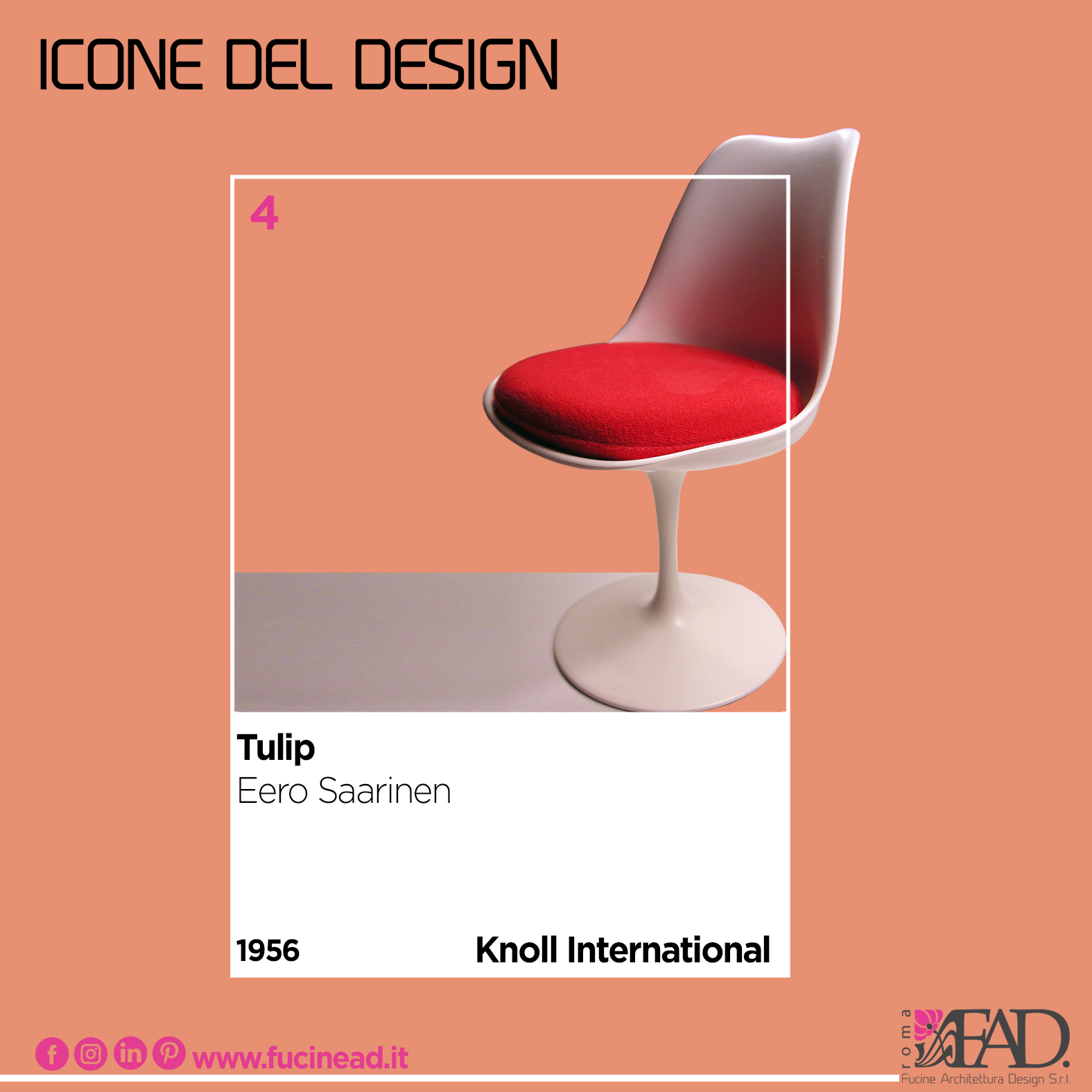 Seven different seat modules in various sizes and colours, one of the greatest expressions of the global Radical Design. The anatomical features of the UP5 + UP6 Series, designed by Gaetano Pesce, are unequivocal: they represent a womb, reminiscent of prehistoric fertility statues with the addition of a sphere tied to the armchair body, that acts as a pouffe - "the woman with a ball at her feet".

In detail, it is characterised by a two large breasts located in the upper part of the backrest, while the lower part recalls the thighs; the effect is that when you sit down, you feel embraced and protected, as when you were a child sitting on your mother’s lap.

The armchair was born both as a praise to the woman (visible in its forms), and as a criticism of the hard life that women suffer in many parts of the world (represented by the spherical pouffe, the ball at her feet).
The armchairs are made of polyurethane material and covered in stretch fabric. This has allowed that they were vacuum packed since 1973, thus reducing the packaging size by about 90%. 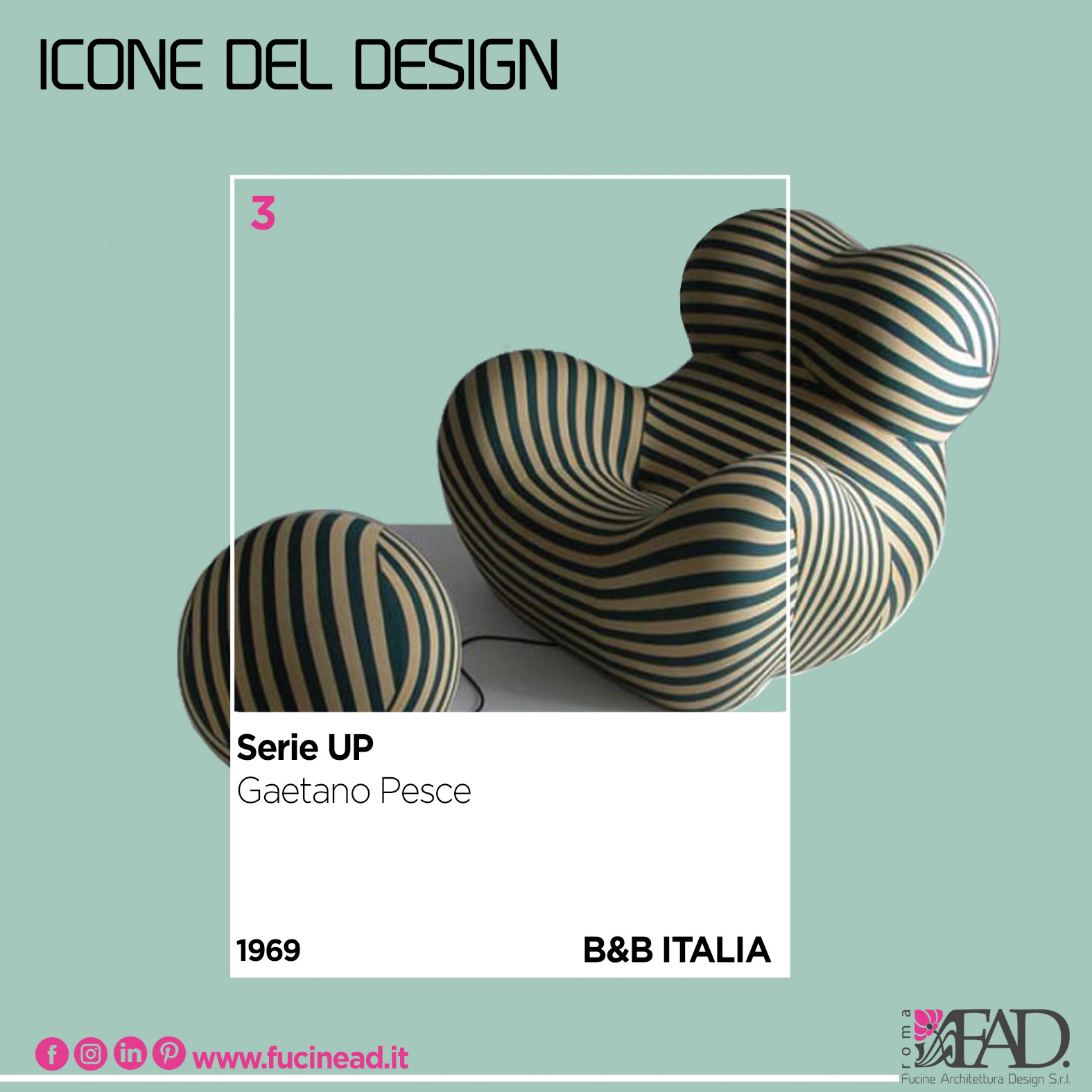 The greatest innovations arise from simple things. The "Arco" lamp by Achille and Pier Giacomo Castiglioni is inspired to the old streetlight lamps, that allow a suspended lighting point. The aim was to create a lighting point from above without being obliged to resort to a traditional ceiling light (as a chandelier).

The appropriate word is "essentiality", like the major works by Castiglioni.

The lamp consists of a vertical parallelepiped base in Carrara marble (65 kg), with a strategic hole that easily allows the movement of the entire lamp, by inserting a cylindrical element (like a broomstick).
The arch is mounted in the rear part of the marble and consists of four extruded steel elements. The bulb is positioned to a height of 2 MT to allow a relaxing broad-spectrum illumination. The light point is positioned inside a dome shaped shade, consisting of two pieces: a perforated spherical cap, which prevents the lamp holder from overheating, and an aluminium ring which is used to adjust the position and height of the shade, according to the arc adjustment . 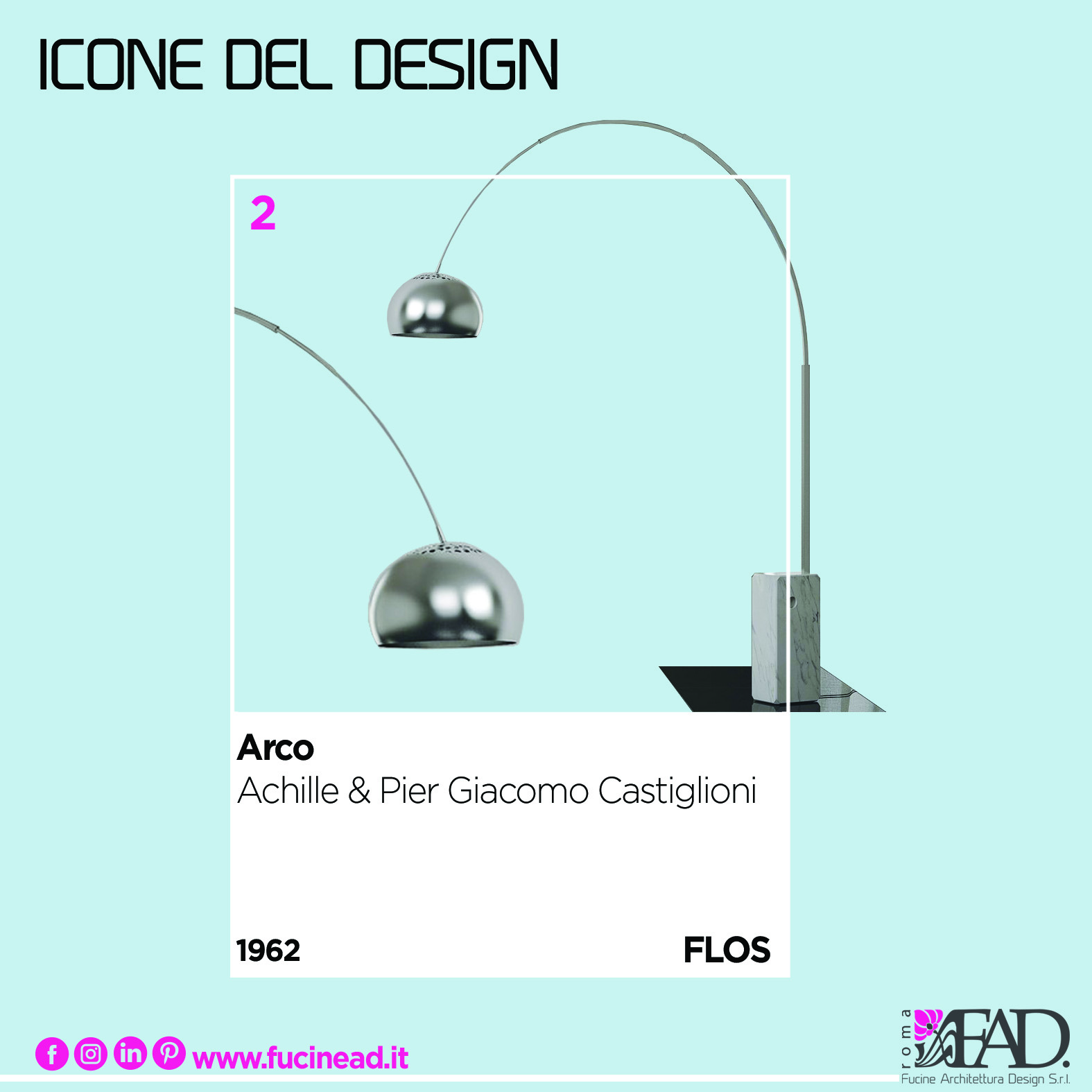 In 1956, the couple of American designers Charles and Ray Eames created what will become one of the style icons, the "Lounge Chair" for hotels, exclusive clubs and business areas.

A swivel aluminium base contains a veneered multilayer shell, made up of cushions covered in real leather. A comfortable seat that also emphasises its function thanks to the presence of the Ottoman, which gives it relaxation and comfort.

The expressive power of the Lounge Chair & Ottoman is so powerful that it has been permanently exhibited at the MOMA, the Museum of Modern Art in New York. 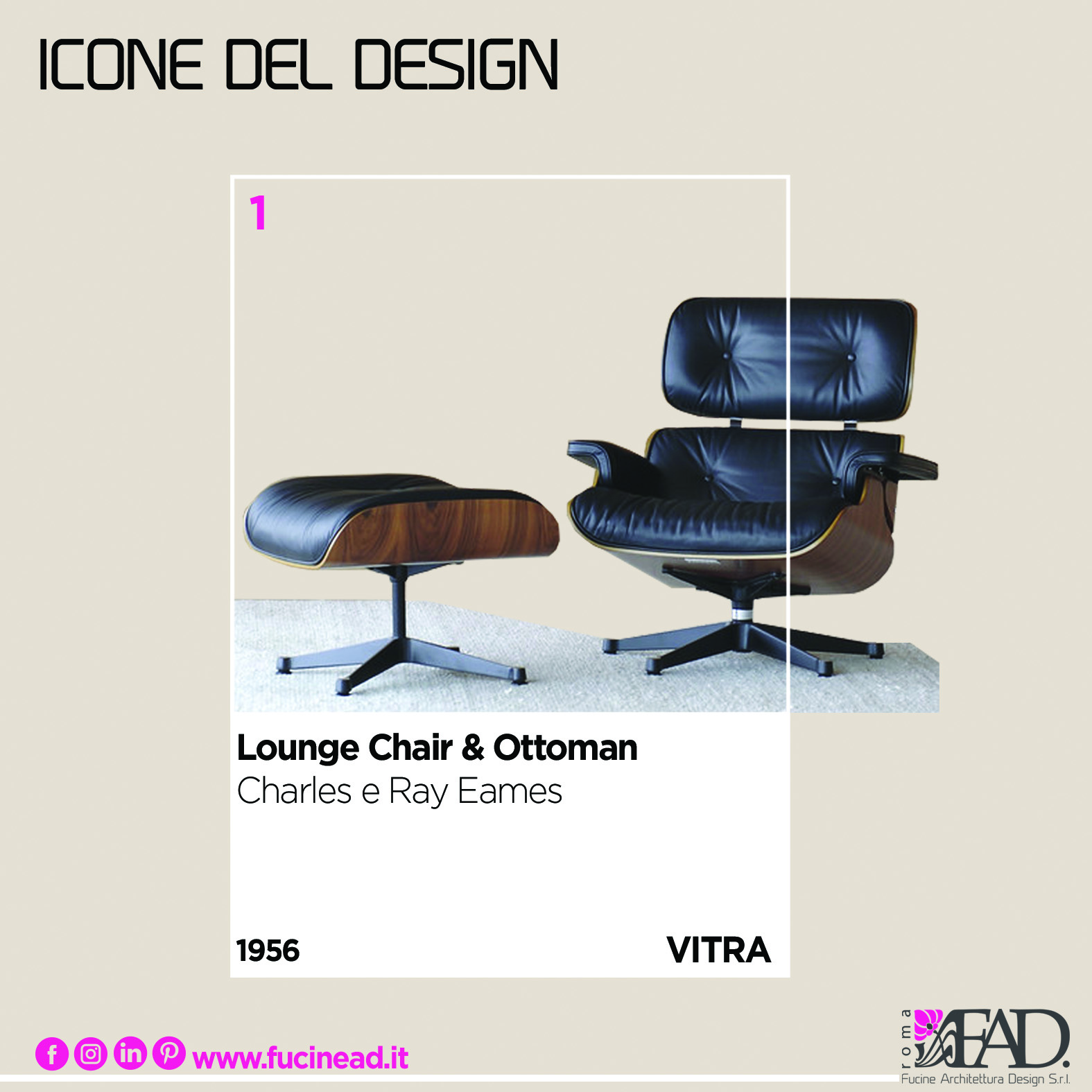