A shopping centre is characterised by many aesthetic and technical details. The clear definition of the accesses to the "Primavera" shopping centre was of the utmost importance: the new escalators, the entrances from the terraced floor, the large entrance signage tower, visible from far away, that houses advertising spaces and district information. A shopping centre becoming a space for the community and a bridge for the generational gap.

We took care of giving a new appearance to the Primavera Shopping Centre, located between Villa De Sanctis and Centocelle, in a highly populated suburban area of Rome. The main objective was to research the identity of the place and customise its environments. We have also handled its aesthetic and functional renewal and, last but not least, one of our objectives was to give it a new social and economic role. We therefore focused on a project that would have allowed the social integration between young people and elderly, since some of the neighbouring and access areas to the structure were deteriorated and even dangerous.
The shopping centre consists of two levels, accessible both from the roof and from the street. Starting from this assumption, three phases of design and construction can be identified:
1- The roof
2- The street level
3- The interiors 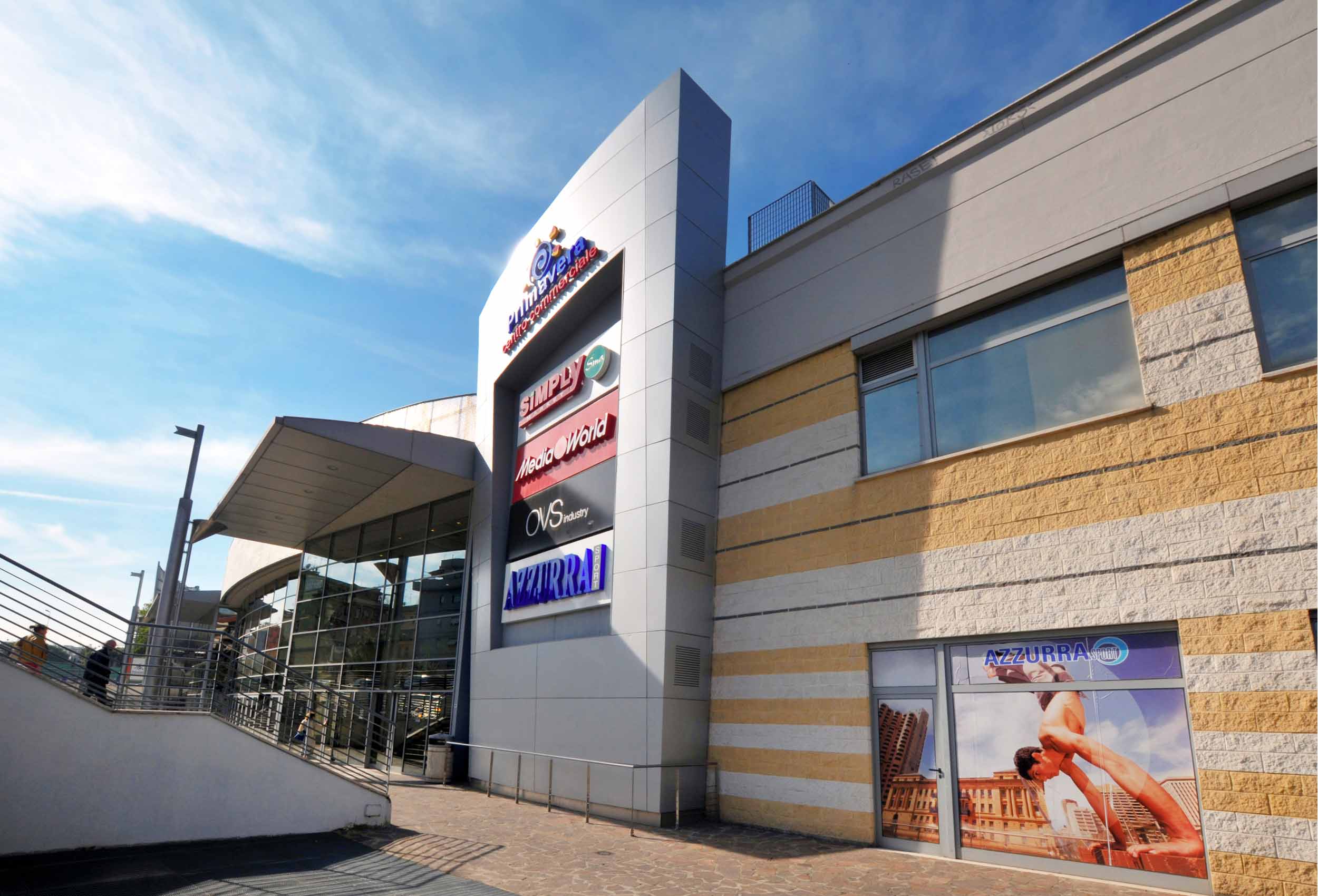 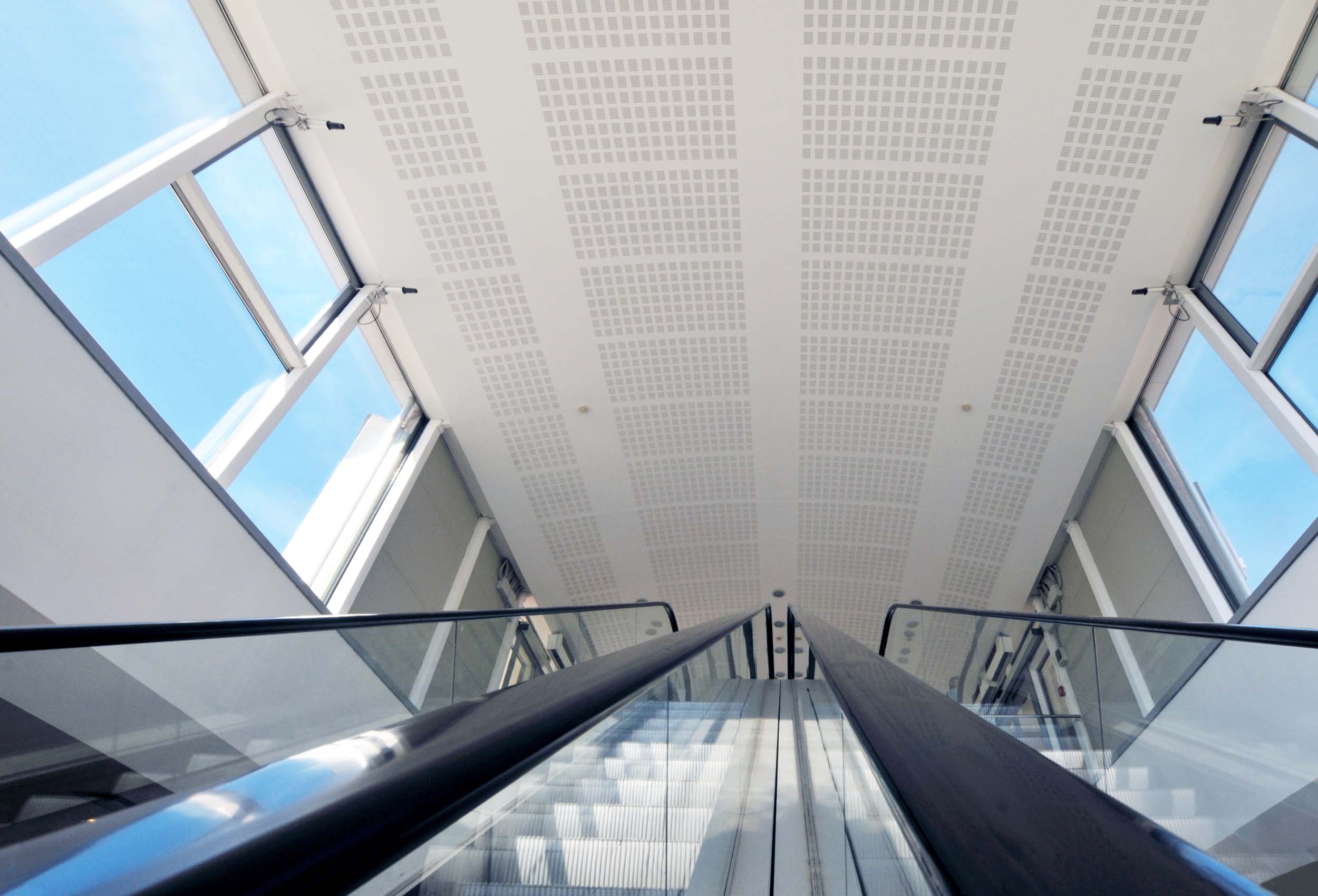 THE ROOF
The roof of the shopping centre housed a car park and some entrances to the shops below, even before the renovation works. There were numerous critical issues: the walls of the perimeter of the roof were too low, and therefore unsafe; the green areas were bare and badly kept; the access covers to the escalators had no bioclimatic qualities and built with materials that increased the heat, thus resulting in real greenhouses. First of all, we have decided to remake the perimeter fence, increasing its height and making it safer; the renovation of the structures housing the escalators was very important: we have completely remade their coverages, by using plaster coated and pre-painted white panels, with a satin matte finish.

The panels of the company Gyproc, "Gypton" model, are very performing, because the sound-absorbing fabric on their rear optimises the acoustic performances. The structure composition and the ventilation systems allow a climatic improvement, thus avoiding the greenhouse effect. We have also designed to cover the chimney on the roof with a splayed aluminium element and to place the signs made by Alucobond inside it. The addition of new signs indicating the activities, the shops and the accesses was particularly important. 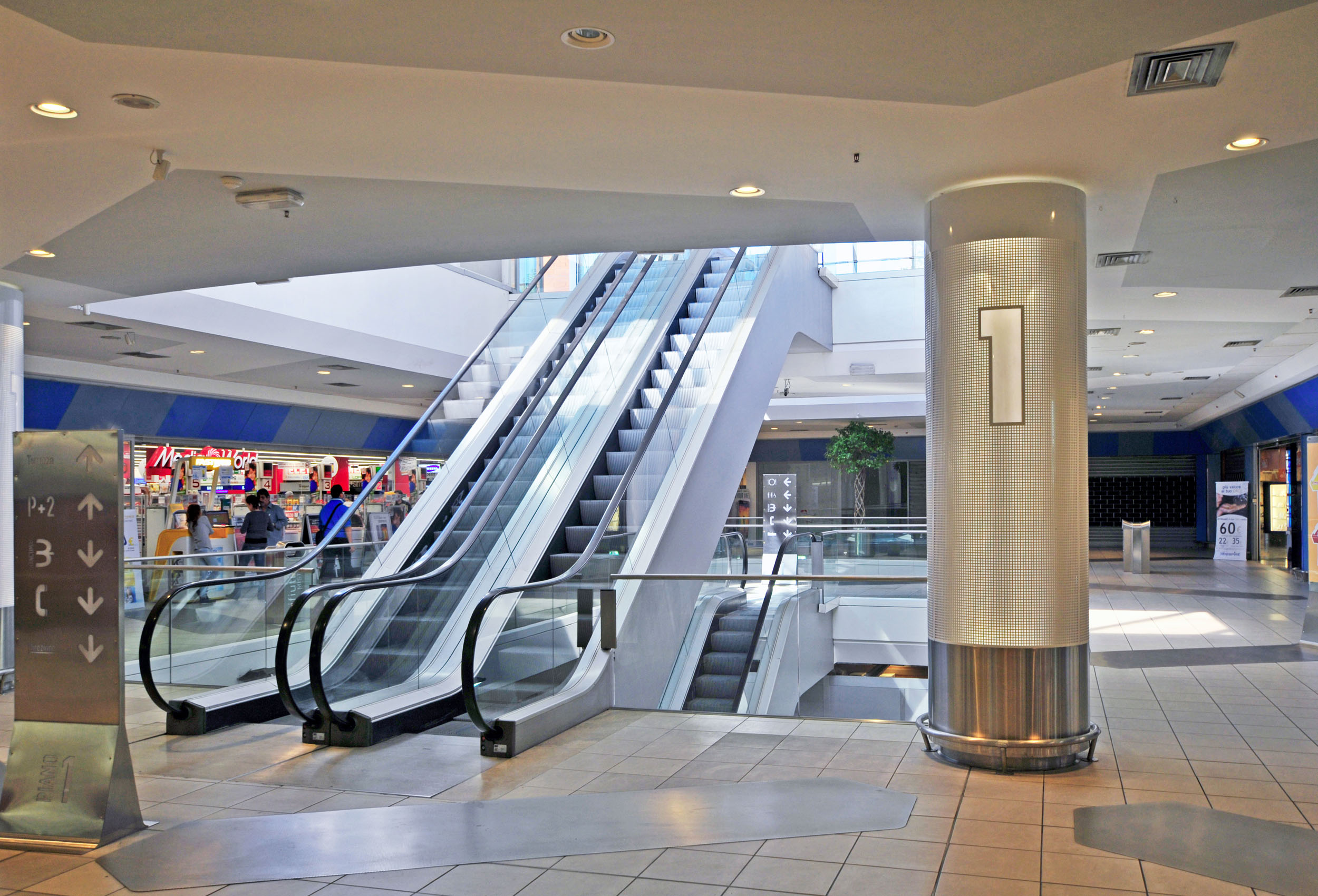 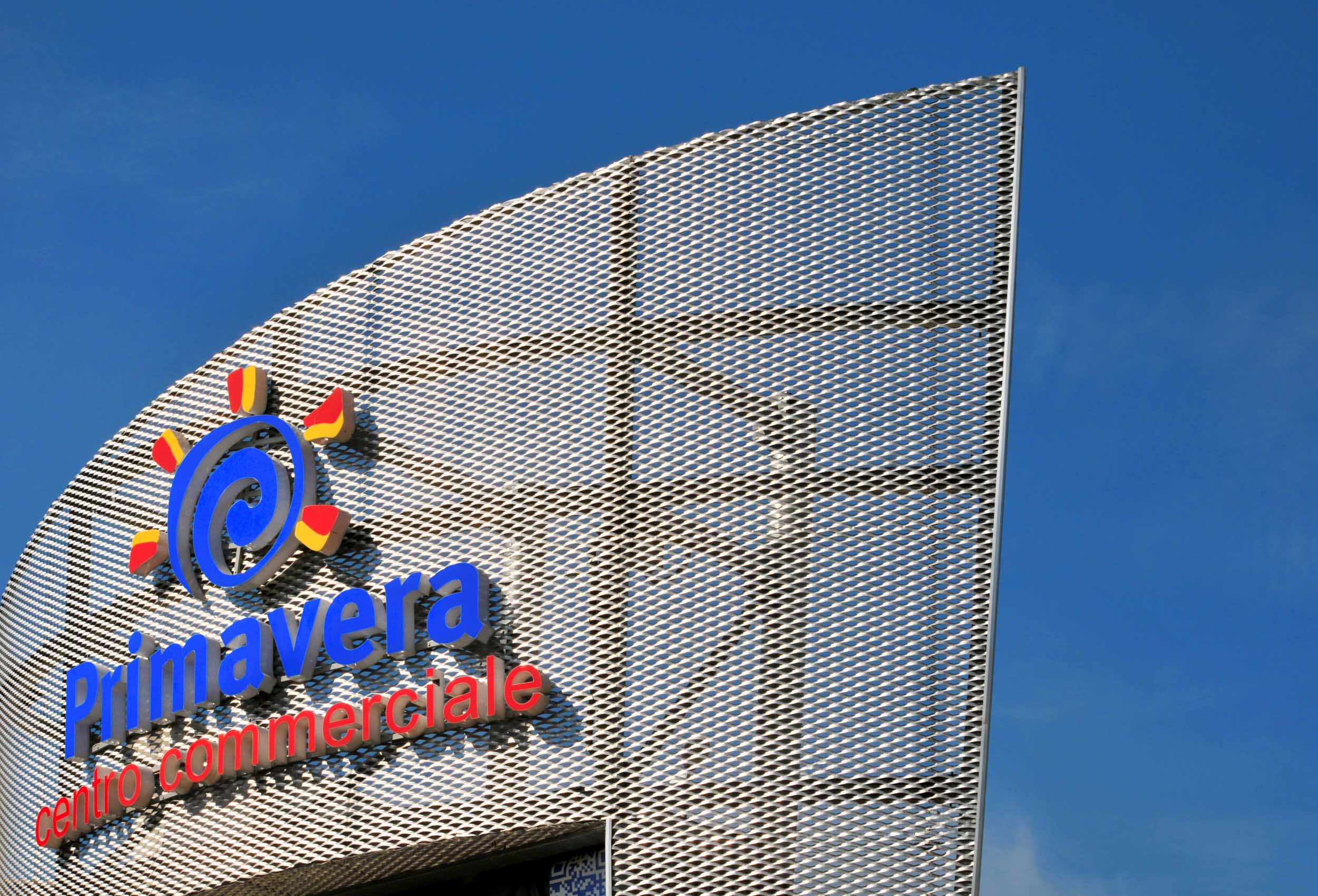 THE STREET LEVEL
The two-storey shopping centre is at a lower level than the street level. Our first hypothesis was to create a "pedestrian-level" connection between the street and the second floor; this hypothesis was not further implemented to avoid disadvantaging the lower floor. The whole façade has been completely revised with modern and light materials: the profile of the façade is a horizontal parallelepiped, on which we structured two larges vertical signage towers with soft shapes, to house the names of the main shops of the shopping centre. We planned to insert a large screen on one of the two signage towers, to provide information on both the shopping centre and the district, thus becoming an attraction point. The entire profile and the signage towers have been manufactured by the company Fils, using a stretched aluminium plate, "Academy" model, whose play of folds creates a soft and modern effect.
THE INTERIORS
The interiors of the shopping centre were realised on the project of the IED (European Institute of Design). We took care of the Works Management and of the Safety at the construction site. The project of the IED involved the creation of a design on the existing flooring by carefully laying stainless steel plates to create a beehive design, mirroring the paint ceiling. The customer bathrooms have also been redone, the obsolete furniture have been replaced by new custom-made ones and a baby parking was created. To finish, the touch of new LEDs that have embellished the ceiling. The functional organisation of the entire shopping centre was enhanced even more by installing new signages, placed both on the columns and on specific tailor-made totems.
The final aim of the project was therefore to create a familiar environment for the users, thus encouraging them to stay, stop, relax, and socialise, and not only to walk throughout the spaces for their shopping.
We can conclude by saying that a new Spring has blossomed! 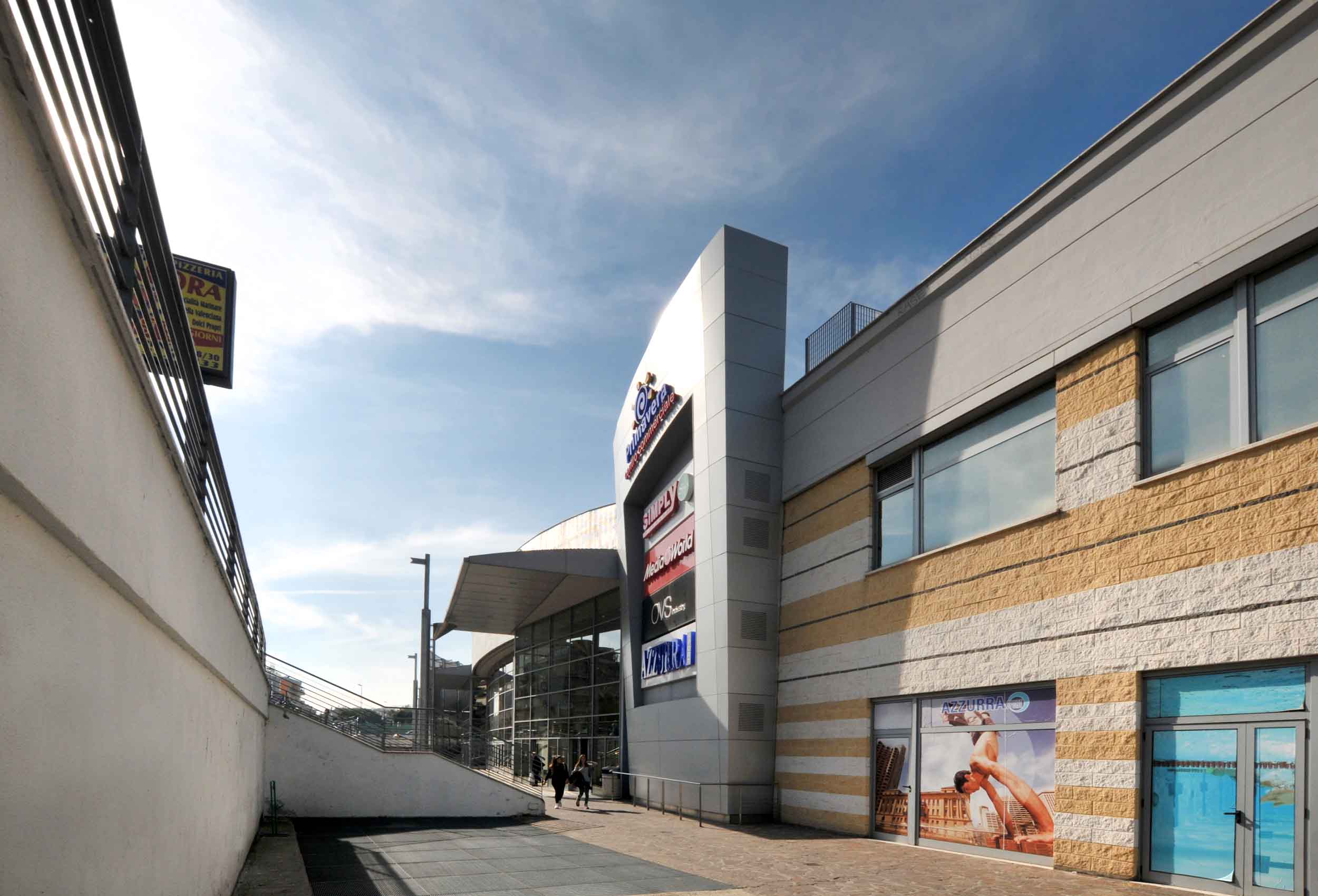