In the hearth of our "fucina"

A bright, versatile, and welcoming space characterised by the use of materials and finishes which weave together, almost playing. A balance of colours, completed by the colourful backs of architecture magazines and catalogues, as well as by sample of materials and outlines of ongoing projects. This is FAD, Fucine Architettura e Design.

The progressive increase in the number of our colleagues, along with the intensification of business meetings with customers and suppliers, led to the need to find a new arrangement for our office, able to house a greater number of workstations in a comfortable and representative space.
The base of the project was to understand which interior layout could best represent the activities of our Studio and convey the "vision" that guides our projects. The starting point is a flat of approximately 150 Sqm, located on third floor of a residential complex in the Tuscolano district, in Rome.
The layout of the internal spaces was clearly designed to subdivide the domestic environments: the sleeping area consisting of two bedrooms, two toilets and a utility room, and a living area, consisting of a kitchen with dining room and living room. A corridor, in front of the entrance, crosses the entire flat, thus acting as watershed between the two macro areas described above; the corridor was used to design the new internal layout of the flat, transforming it into an architecture studio.
A single "architectural sign", which later became a partition, splits the former living area obliquely, thus creating two working open spaces and a large meeting room, near the entrance of the studio. The three rooms are acoustically divided by means of full-height glass walls, which can be fixed or packet-like folded, according to the needs; the three rooms form together a single, large, bright, and contemporary environment, able to expand or contract according to the ongoing working activities. 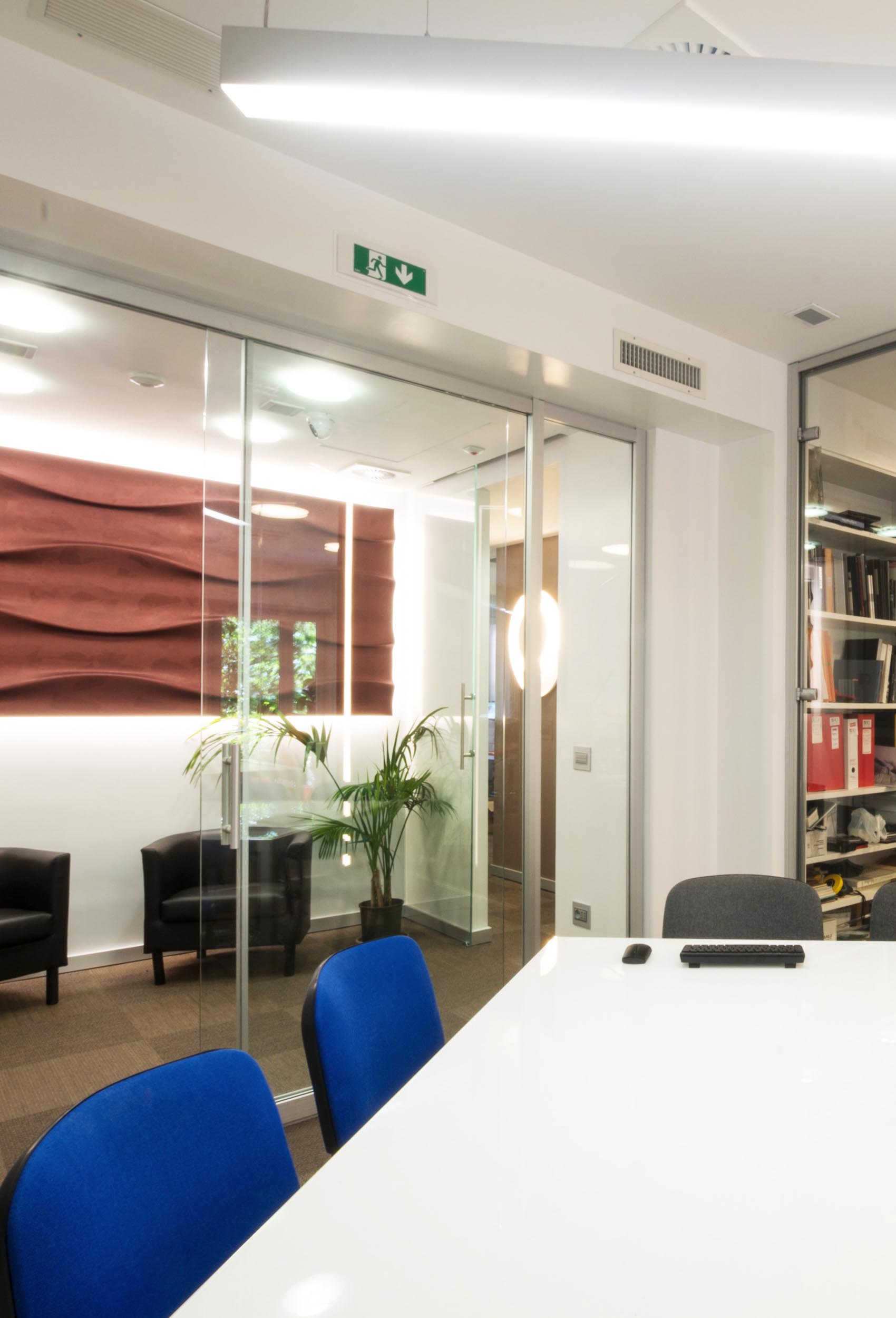 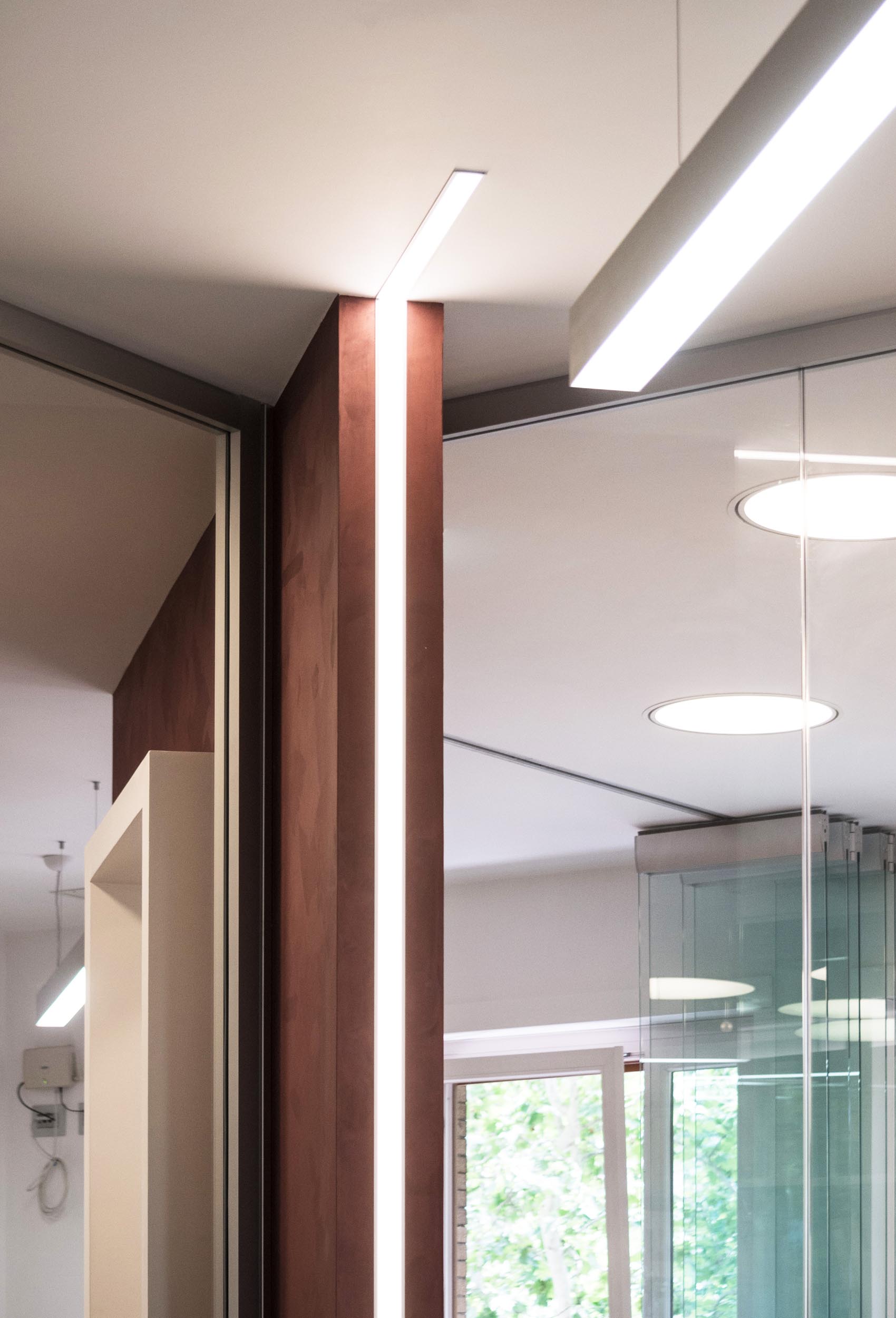 The area reserved to the management office, the accounting department and to a small temporary archive is on the other side of the central corridor, accessible through a passageway, equipped as room for large prints. The flooring made of Bolon Tatami finish by Liuni is laid in almost all the rooms; its colour, similar to Sienna, gives the perception of walking through a single large environment, even if it is differentiated according to the activities carried out.
The general lighting of all the rooms is realised with recessed ceiling lamps, in addition to hanging lamps, such as the Lucky Evo manufactured by Novalux or the Tolomeo manufactured by Artemide, or wall-mounted lamps with movable arm, designed not to clutter the desks. A more scenographic solution was chosen for the entrance area. We opted for the Bahia lamp by Foscarini; the lamp dialogues with a large plasterboard panels, modelled with 3D technology, the sinuous lines of which attract the gaze of our guests in the waiting room.
To carry out our working activity and the management of the Studio in the best possible way, we designed it to be equipped with the most advanced technologies in the fields of electricity, home automation, IT, fire prevention and mechanical plant.
The entire office is served by an advanced home automation and computer systems built with Vimar’s plant engineering, that can be managed on place and by remote. The automated management of electrical loads allows an optimal use of the various equipment of the studio, as well as to monitor the relative electrical consumptions over time.

The set scenarios allow the automated management of lighting, roller shutters, awnings, climate control, alarm system, irrigation systems for balconies, and office water supply.
Everything is aimed at working in a more comfortable environment and achieving an optimisation of consumptions, that is important both in economic terms and environmental sustainability ones. 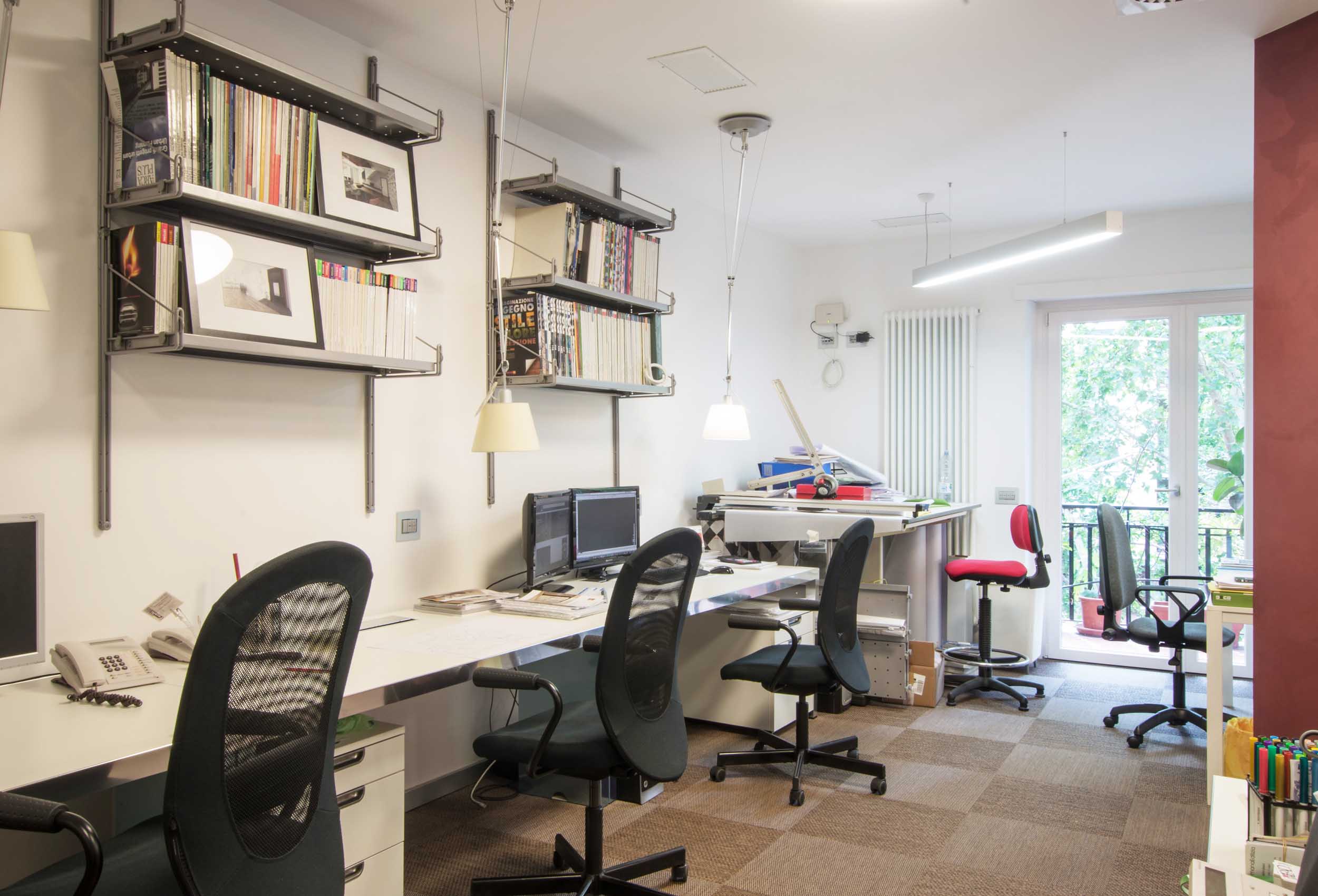