The aim of this project regarding an exquisite flat in Rome was to give an added value to the entire house, as well as a greater comfort to its users. We have therefore carefully studied in detail the specific interventions to be made, so that to integrate them in the pre-existing modern and well-maintained design.

The large flat involved in this project had undergone different changes over time and was in excellent conditions, except for a distribution problem. The family that currently owns the flat bought it several years ago and decided to divide it into two smaller flats with a shared entrance, in the following years. Then, the family needs changed again, and they decided to unify the flat by connecting the two living areas, but without changing the internal distribution of the two flats: there were therefore two living areas and two kitchens to the South, two sleeping areas to the North divided by an internal partition, and a central laundry which communicated with the two halves. 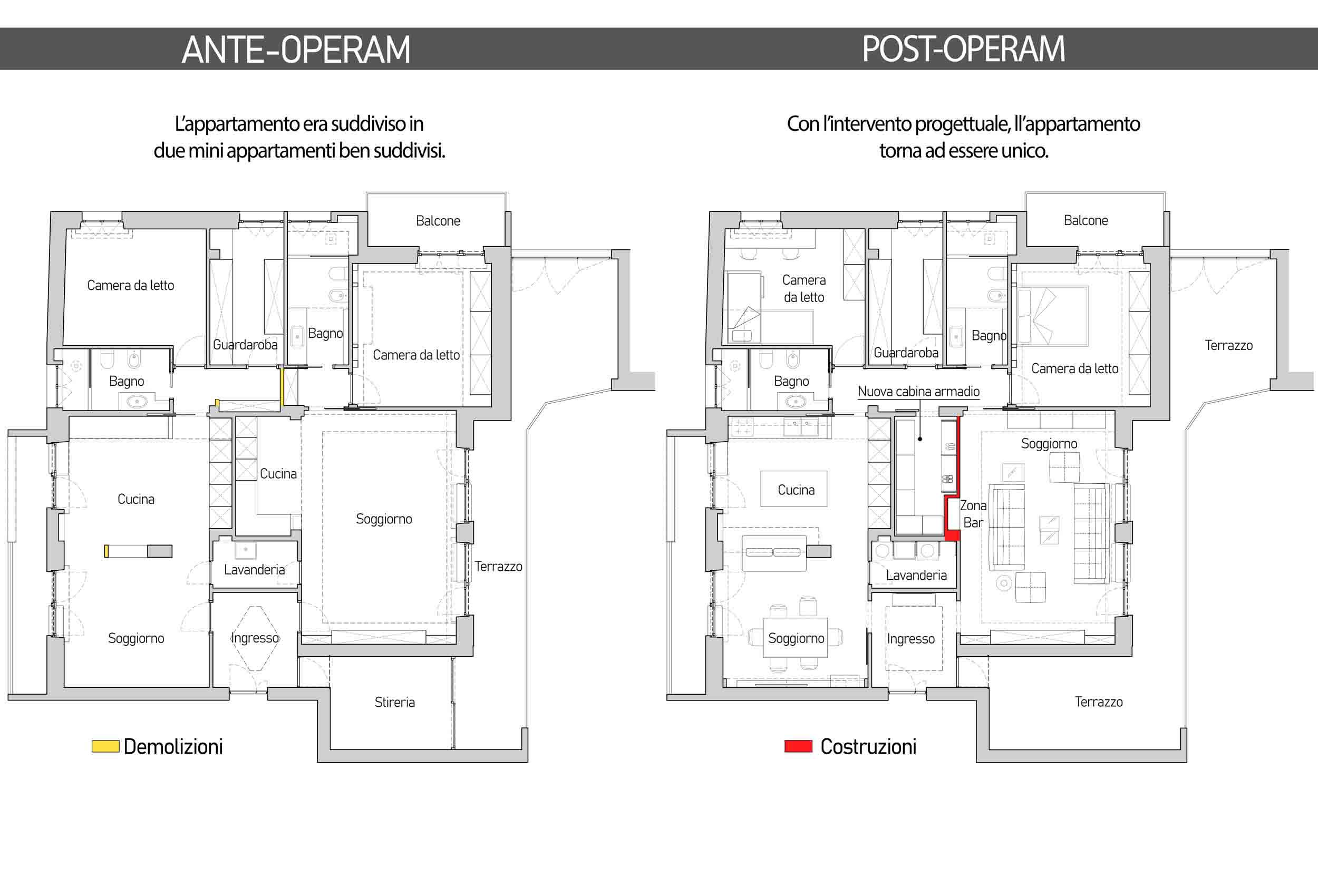 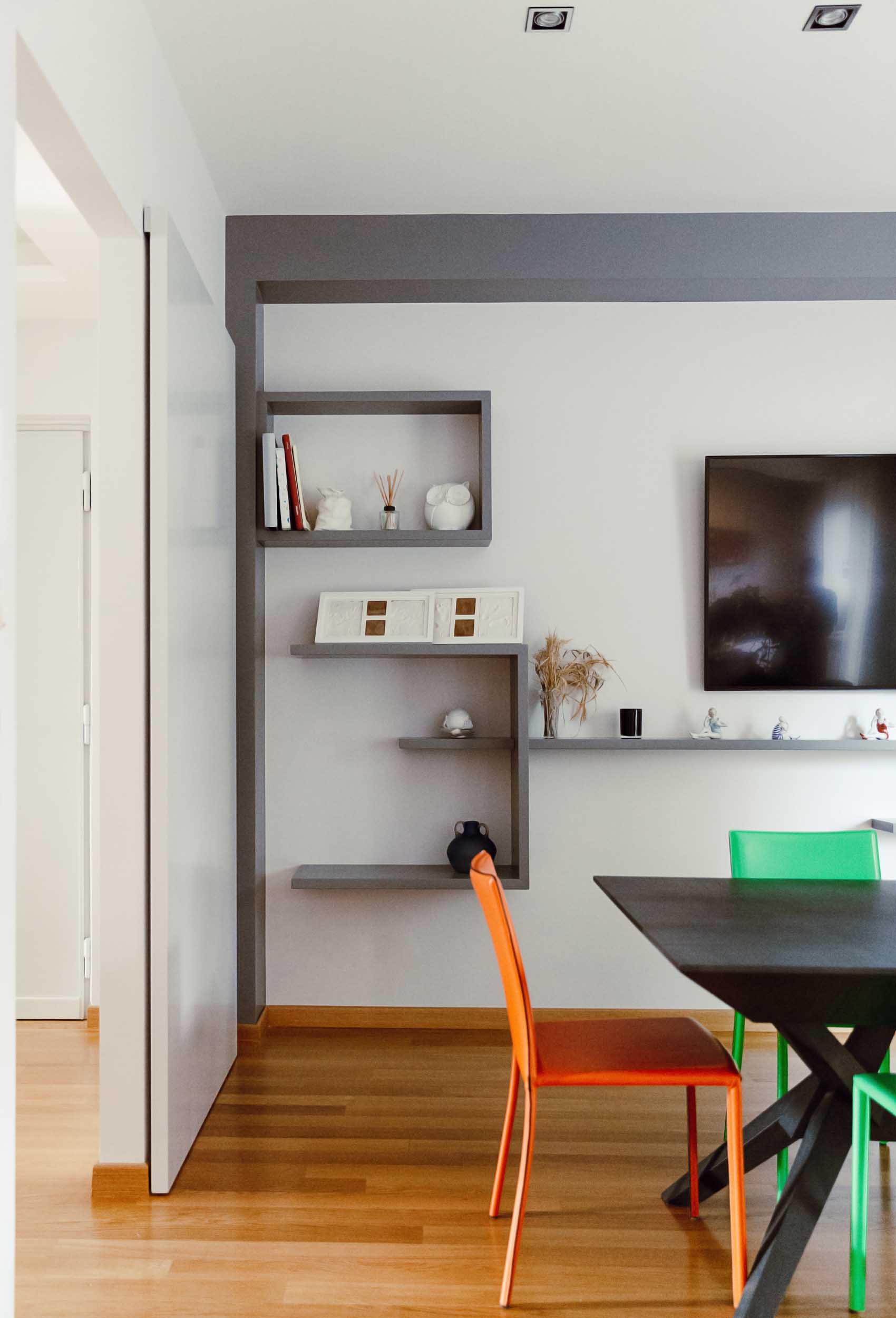 That was the starting point of our specific interventions, aimed at enhancing the actual layout.
Our first aim was to connect the northern part of the flat by demolishing the fixed wardrobe and the internal partition, thus unifying the sleeping area and consequently the entire flat.
Secondly, we defined a central nucleus of service rooms, to enhance the large living area, consisting of a living / relaxation area on the right and a kitchen / dining room on the left.
To optimise the internal layout, we have decided to close the laundry door on the living side and to keep the one on the kitchen side unchanged.
In addition, the kitchen of the former small flat on the right was demolished to make way for a large walk-in-wardrobe.
An opening on the corridor side of the sleeping area was created, closed by an external sliding door.
As for the living room side, we decided to continue the line of the laundry wall, thus further defining the perimeter of the living room, and also creating a recess, characterised by crystal shelves, and designed as a bar area.
Few changes were made to the entrance, that is almost the same, except for those made to the false ceiling and to the lighting.
The most substantial interventions were made in the kitchen / dining area.
This area was divided by an equipped wall, built to hide the presence of a pillar and to divide the living room from the kitchen and dining room.

We decided to further unify the environment, by demolishing the dividing wall, while maintaining two different areas: the kitchen on one side and the dining room on the other.
To integrate the pillar and define the two rooms without separating them, we have created a lowered portion with a plasterboard ceiling, thus defining a volume that fits in that of the pillar.
In this way, also thanks to a studied lighting integrated into the existing one, we have defined a more intimate area to house a small sofa, for a less formal relaxation area.
The kitchen now devoid of the dining table can house a central island, created in line with the design of the existing kitchen.
We created a new partition equipped with TV on the wall opposite to the kitchen, which reproduces the same colours of the recess and of the pre-existing equipped wall of the living area. We decided to move the dining area in this premise.
Many aspects must be assessed during an interior design intervention.
In particular, if the flat does not require a total restyling, the specific interventions must be carefully studied to be harmonious with the existing contest, and to give an added value to the whole. 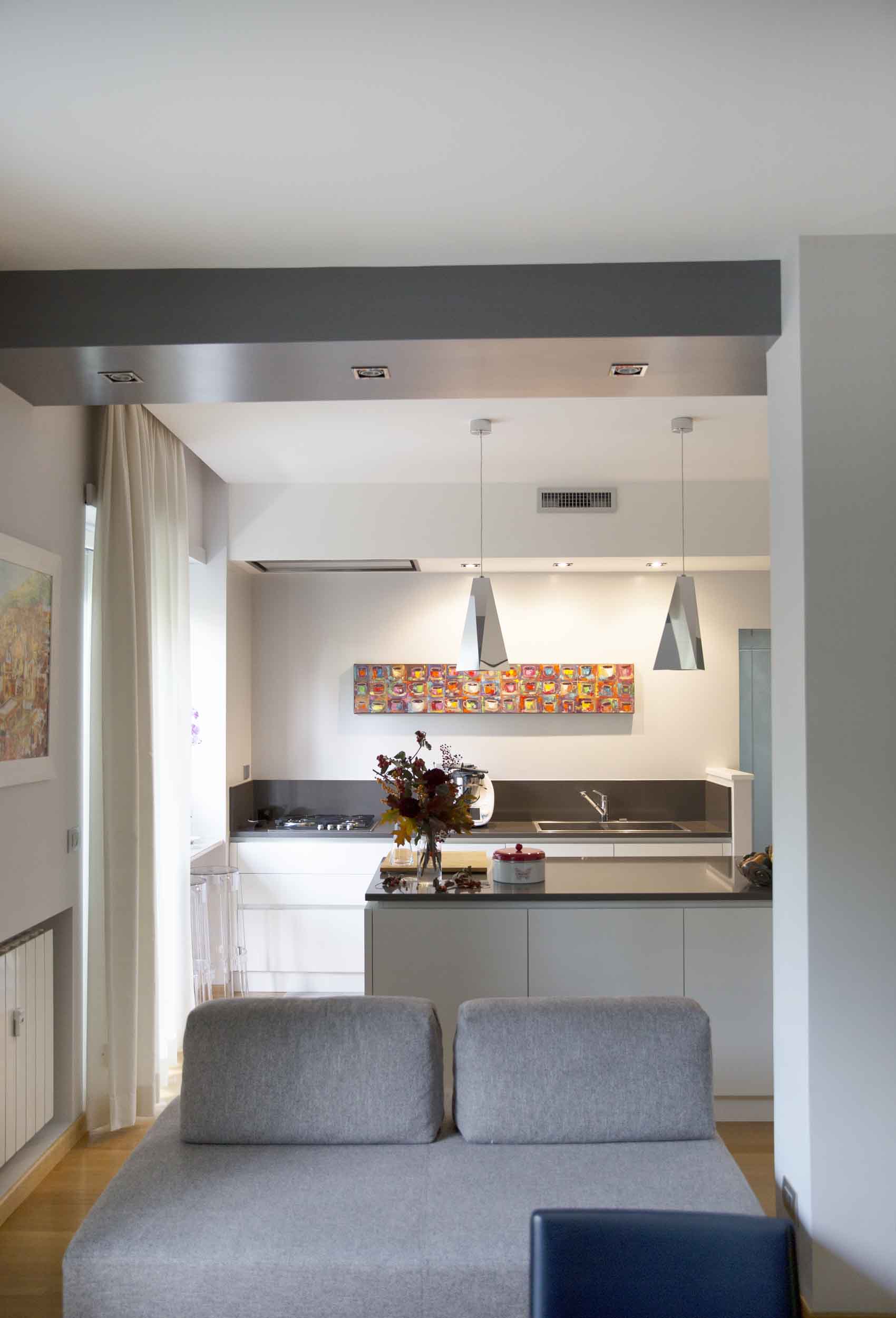